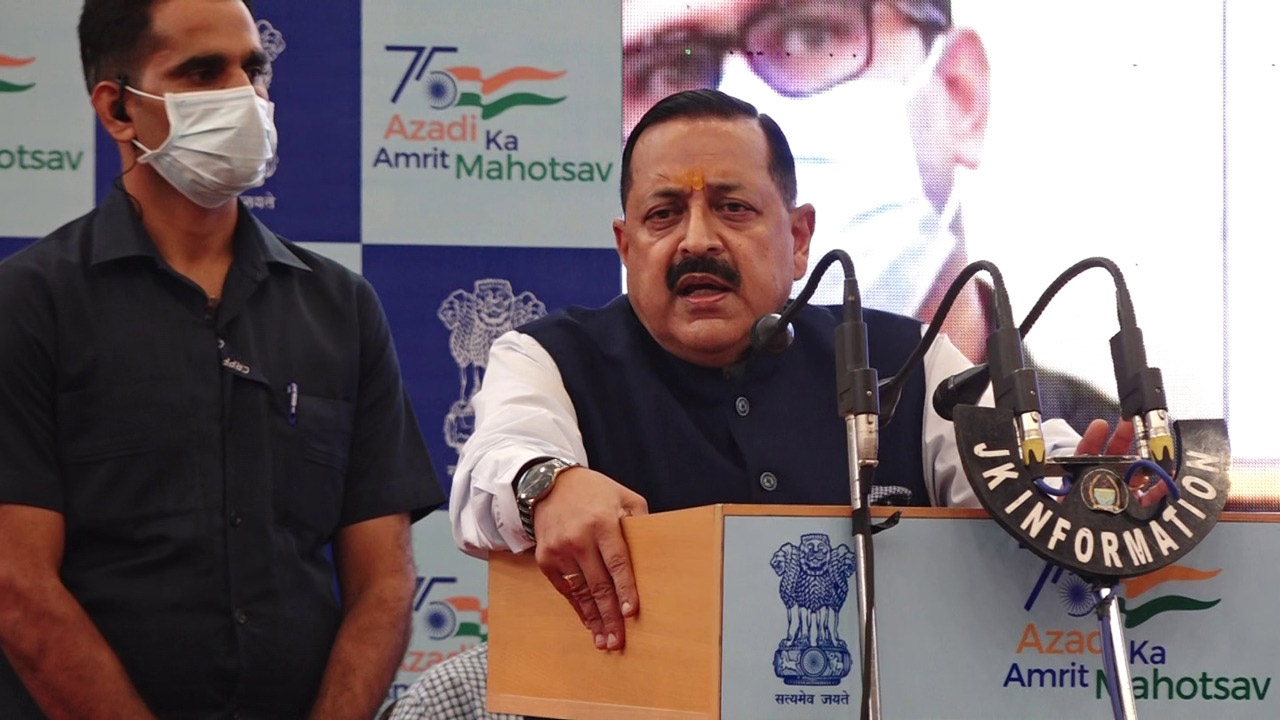 JAMMU, Sept 22: Union Minister of State (Independent Charge) Science & Technology; Minister of State (Independent Charge) Earth Sciences; MoS PMO, Personnel, Public Grievances, Pensions, Atomic Energy and Space, Dr Jitendra Singh today inaugurated ‘Jammu Haat’, a hub of export promotion at Exhibition Ground, Jammu.
The ‘Jammu Haat’ has been inaugurated today on the occasion of ‘Vanijya Sapta’, a platform for entrepreneurs, buyers, sellers and exporters.
Addressing the participants during the inauguration, Dr. Jitendra Singh said that when India is celebrating ‘Azadi Ka Amrit Mohatsav’, 75 years of Independence, the next 25 years are going to be crucial for the nation’s growth and progress. Reiterating Prime Minister Shri Narendra Modi’s words, Dr. Jitendra Singh said that by 2047 when India would emerge as ‘Vishwa Guru’ on its 100 years of independence, it will be an absolute India consisting of east, west, north and south of which Jammu & Kashmir is also a part & thus people of Jammu must remain steadfast and prepare themselves for that important historical moment.
Dr Jitendra Singh further said that soon after taking oath as Prime Minister on 26th May, 2014, one of mantra given by Prime Minister was the maxim “Minimum Government – Maximum Governance and it was unanimously decided that the left out states, UTs in terms of development, governance etc. by the previous Governments will be taken care of and every step will be taken to take them at par with other states and UTs in the country. The best example of this maxim is ‘Mission Northeast’ started by this Government of which ‘Northeast Development Model’ has become an example throughout the country and northeast has been converted into heartland from hinterland by this Government, the Minister added.
On the ongoing public outreach program in the UT of J&K, Dr. Jitendra Singh said that after PM Shri Narendra Modi took oath for the second term, ‘Mission J&K’ was strongly emphasized, of which one of the important steps taken has been the extensive public outreach program involving Union Ministers which is going on these days.
Listing the achievements brought about from the last 3 years in J&K, Dr. Jitendra Singh said that all the central laws are now applicable to the UT of J&K be that the Anti corruption law or other laws that was done to bring J&K into India’s mainstream. The erstwhile state’s grievance portal that was never functional has now been connected to CGRAMS so that the people’s grievances are redressed in time, the Minister added. The Minister also said that more than 50 thousand crore investment is expected in J&K now which will change the dynamics of development in the UT in the coming years.