Excelsior Correspondent
NEW DELHI, July 19: Union Minister Dr Jitendra Singh today moved in Lok Sabha, the crucial “Right to Information (Amendment) Bill 2019”, on behalf of the Modi Government, amidst stiff opposition from Congress, All India Trinamool Congress (AITC), Owaisi led All India Majlis-e-Ittehadul Muslimeen (AIMIM) and other parties.
Congress Parliamentary Party leader Adhir Ranjan Chowdhury, Shashi Tharoor of the same party, Prof Saugata Roy of AITC and Asaduddin Owaisi of AIMIM were among those who issued written notices objecting to the introduction of the Bill, even before the Minister had tabled the Bill.
Rebuffing the opposition attack with facts, logic and sarcasm, Dr Jitendra Singh alleged that the RTI Act, 2005 enacted by UPA-1 was brought in haste and it is a clumsily drafted, half-baked legislation. What the Modi Government is trying to do now is to make up for the fallacies and lapses left by the Congress-led Government, he added.
Pointedly responding to Prof. Saugata Roy’s allegation that this was an attempt to weaken the Information Commission by reducing their salaries and other powers, Dr Jitendra Singh said, the Bill introduced by him only sought to authorize the Government to make the Rules which had not been framed earlier by amending Section-27 of the Act. The salaries and perks of the Members of Information Commission will be decided only after the Government gains that authorization and therefore, it is prejudicial on the part of Roy to assume what would be the salaries of the Members of Information Commission in future.
While Owaisi referred to a number of legal clauses while opposing the introduction of the Bill, Dr Jitendra Singh retorted saying, while he was himself not a qualified lawyer like Owaisi, but he had the sense of law to understand that it was a gross anomaly to designate the Central Information Commissioner and the Information Commissioners as equivalent to the Chief Election Commissioner and the Election Commissioners respectively, and thereby also equivalent to the Judge of the Supreme Court, even as the verdict passed by them is liable to be challenged in a State High Court. To what extent, he asked, it makes sense to allow a Supreme Court Judge’s verdict to be challenged in a High Court.
Dr Jitendra Singh said, the Modi Government has, right from the beginning, followed the principle of transparency, citizen-centricity and ease of delivery in governance. Over the last five years, a number of measures have been taken to make the RTI more effective and to make it available 24 hours on mobile app.
The Bill being brought by him, Dr Jitendra Singh claimed, is only an enabling legislation which will help in further streamlining and institutionalizing the RTI Act, 2005 through RTI (Amendment) Bill, 2019. 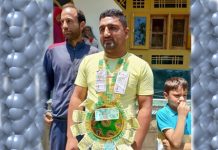