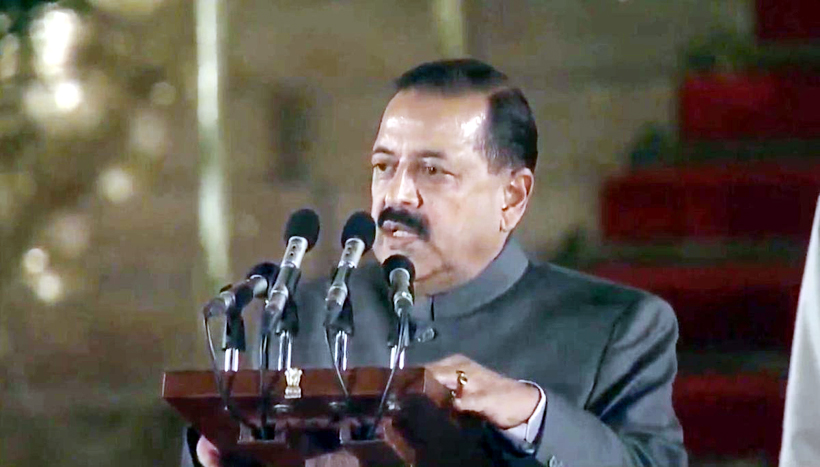 Excelsior Correspondent
JAMMU, May 30: Second time Lok Sabha member from Udhampur-Kathua-Doda constituency, Dr Jitendra Singh, who has the distinction of defeating bigwigs like Ghulam Nabi Azad, former Chief Minister of the State and present Leader of Opposition in Rajya Sabha and Vikramaditya Singh, son of former Sadr-e-Riyasat Dr Karan Singh, today made it to Prime Minister Narendra Modi’s Council of Ministry for the second consecutive time in view of his hard work, initiating series of reforms in the Prime Minister’s Office (PMO), development of North East, whose Independent charge was held by him, and effectively projecting the nationalist voice of J&K at national and international levels by countering propaganda of Kashmir-centric parties.
Sixty-three year old Dr Jitendra Singh has recorded 3.57 lakh victory margin in the Parliamentary elections from Udhampur-Doda constituency, which figured among 10 top victories across the country.
Dr Jitendra Singh had contested his maiden election in 2014 from Udhampur Parliamentary constituency after joining the BJP in 2012, and went on to defeat Azad, who was also supported by the National Conference, with 62,000 votes. This time, he beat Vikramaditya Singh of Congress, who was supported by National Conference as well as PDP.
Dr Jitendra Singh had gained popularity not only in his constituency but other parts of the State and the country due to his developmental agenda, popular reforms and effectively countering the Kashmir-centric propaganda of some of regional political parties by projecting nationalist voice in the country.
A doctor by profession and an author, Dr Jitendra Singh was columnist with Daily Excelsior, the largest circulated newspaper of Jammu and Kashmir. His column–`Tales of Travesty’, which used to figure on Editorial page of the Excelsior every Sunday, was read among cross sections of society. He continued with the column till his election to Lok Sabha in 2014 followed by induction as Minister of State in the Prime Minister’s Office (PMO) and Incharge of other Departments including Independent charge of North East.
Dr Jitendra Singh was among nine Ministers inducted as Ministers of State with Independent Charge today besides 25 Cabinet Ministers including the Prime Minister and 24 Ministers of State.
It was in view of his hard work, wider knowledge, reforms and projecting the things in Jammu and Kashmir in right perspective that he was inducted in the PMO despite winning his first-ever election in 2014 and was now again taken into the Council of Ministry by Prime Minister Narendra Modi.
Dr Jitendra Singh has gained full support of Modi and party national president Amit Shah, which was again reposed today. Within short span of time, Dr Jitendra has figured among top brass of the BJP at the national level.
Political observers were of the view that it was because of growing popularity of Dr Jitendra Singh at the national level and his immediate counter of narratives put forth by the Kashmir-centric parties that an all out attempt was made to defeat him with Opposition forming `Mahagathbandhan’ against the BJP on 3 seats but Dr Jitendra emerged more powerful by winning the seat with highest-ever victory margin in Jammu and Kashmir.
Always affable, Singh was the Minister of State for Personnel, public grievances and pensions, Department of Atomic Energy and Space until the dissolution of 16th Lok Sabha recently. Many key reforms like abolishing interviews at junior-level recruitment in Government jobs and doing away the need for attestation by a Gazetted Officer were brought in during Dr Jitendra Singh’s tenure to ease governance and make it citizen-centric.
He also brought major changes in resolving governance-related grievances received from people across the country, which was one of the key focus areas of the Government.
Dr Jitendra Singh’s Ministry played a crucial role in processing appointment in the country’s first anti-corruption ombudsman Lokpal that also took shape during his tenure as the Minister for Personnel.
He had been vocal about his views for the welfare of his home State, at times facing the ire of local politicians.
His handling of critically important matters related to bureaucracy, governance and approach towards the development of the North-Eastern Region was praised by many, including his party BJP and the RSS, its political ideologue.
Dr Singh wears many hats including a medical practitioner, author and Professor. He has a flair for writing and has authored six books and chapters in about a dozen textbooks for Postgraduate course in medicine.
An MBBS and MD (Medicine), Dr Singh was educated at Stanley Medical College, Chennai and at the All India Institute of Medical Sciences, New Delhi.