NEW DELHI, Dec 20: Union Minister of State (Independent Charge) Development of North Eastern Region (DoNER), MoS PMO, Personnel, Public Grievances & Pensions, Atomic Energy and Space, Dr Jitendra Singh today launched “Integrated Government On-line Training” (iGOT) courses facility for officers in Government of India. The new hi-tech mechanism developed by the Department of Personnel & Training (DoPT), he said, will further supplement and strengthen the existing training programmes through “Massive Open On-line Courses” (MOOCs).
Congratulating the officers in the Ministry of Personnel, including DoPT and ARPG, Dr Jitendra Singh hailed the new launch as a significant step forward in making the optimum use of new technology to achieve best practices in governance. He said, it has been a practice in the government that, from time to time, the officers at different levels and in different departments are expected to undergo upgradation courses, reorientation courses and several other specialized courses, for which they are granted leave and they have to abstain themselves from their official duties for the period of training. However, he said, with the new innovative launch, it will be possible for officers to undergo such training courses without abstaining themselves from the office, without taking leave and at a much more cost-effective manner without even leaving the station.
Dr Jitendra Singh described today’s launch as a landmark and yet another addition to a series of path-breaking initiatives undertaken in the last four-and-a-half years under the leadership of Prime Minister Narendra Modi. The new hi-tech system, he said, will also make it easy to adopt the latest international trends in the field of training which has a special significance, considering the fact that India is now emerging as a global player in a big way.
Dr Jitendra Singh appealed to the State Governments also to adopt the technologies developed by the DoPT, in order to improve their governance practices.
Union Secretary DoPT Dr C. Chandramouli, Union Secretary ARPG K.V. Eapen, Establishment Officer Tripathy and other senior officers of the Ministry of Personnel were present on the occasion. 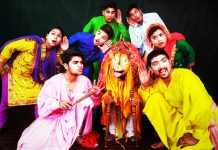 HC for filling posts in CCIs