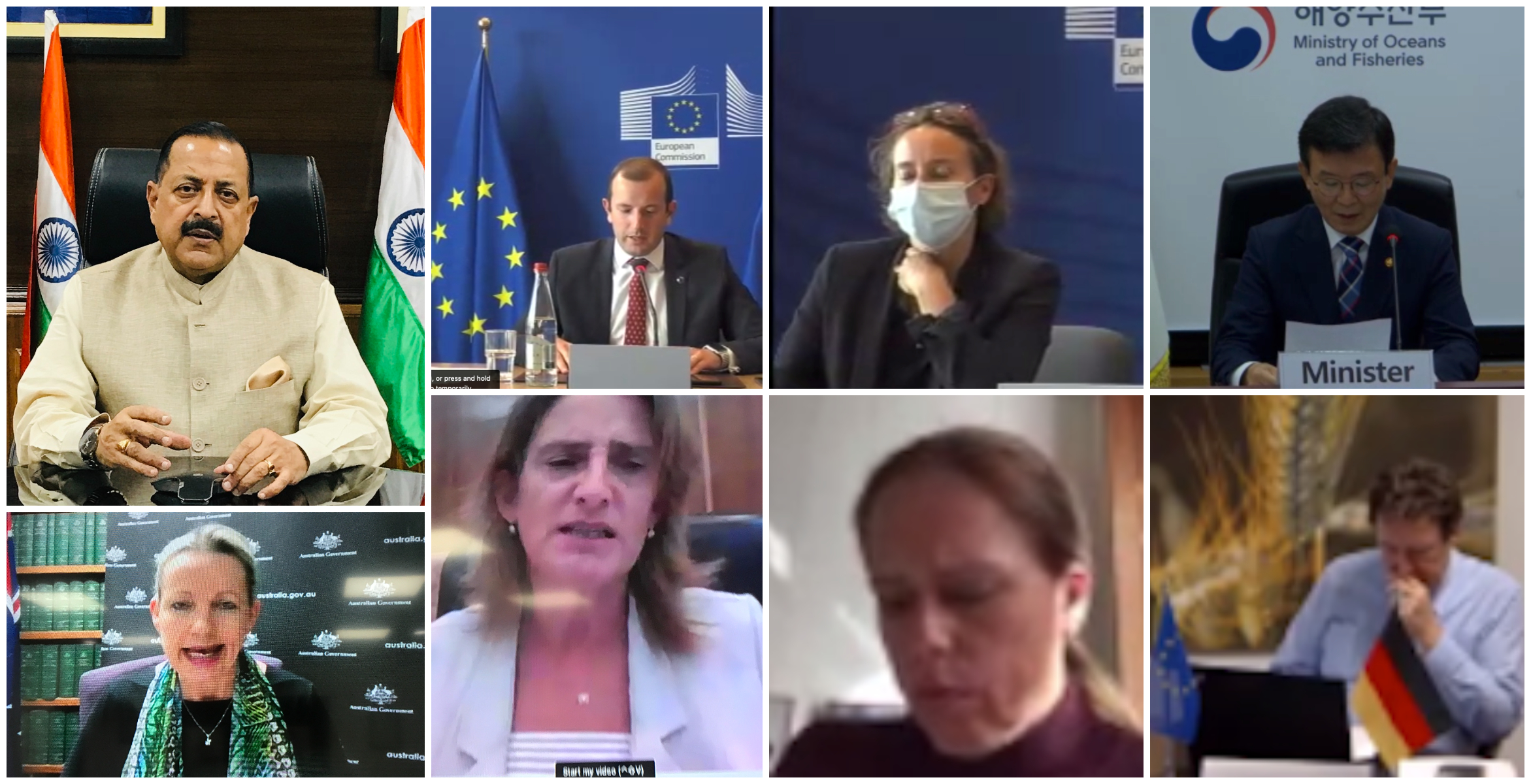 NEW DELHI, Sept 30 : Union Minister of State (Independent Charge) Science & Technology; Minister of State (Independent Charge) Earth Sciences; MoS PMO, Personnel, Public Grievances, Pensions, Atomic Energy and Space, Dr Jitendra Singh today addressed the European Union Ministers and affirmed India’s support to protect the Antarctic environment. India also extended support for co-sponsoring the proposal of the European Union for designating East Antarctica and the Weddell Sea as Marine Protected Areas (MPAs), he said.
Addressing the virtual meeting attended by the concerned Ministers of the countries of the European Union (EU), Dr Jitendra Singh said, “India supports sustainability in protecting the Antarctic environment”. He said, the two proposed MPAs are essential to regulate illegal unreported and unregulated fishing. He urged the Commission for the Conservation of Antarctic Marine Living Resources (CCAMLR) member countries to ensure that India remains associated with the formulation, adaptation and implementation mechanisms of these MPAs in future.
Dr Jitendra Singh said, the proposal to designate East Antarctica and the Weddell Sea as MPAs was first put forth to the CCAMLR in 2020 but could not reach a consensus at that time. He said, since then, substantial progress has been made with Australia, Norway, Uruguay and the United Kingdom agreeing to co-sponsor the proposal. The Minister added that by the end of October 2021, India would join these countries in co-sponsoring the MPA proposals.
Dr Jitendra Singh informed the EU Delegates that India had embarked on Antarctic expedition in 1981, through the Southern Indian Ocean sector and since then, there has been no turning back. He said, till date, India had completed 40 expeditions with plans for the 41st expedition in 2021-22 and added that India under Prime Minister Narendra Modi has solidified its interests in upholding its Antarctic vision.
Dr Jitendra Singh said, this is the first time India is considering co-sponsoring an MPA proposal at the CCAMLR and getting aligned with countries such as Argentina, Brazil, Chile, Korea, New Zealand, South Africa and the USA, which are also proactively considering supporting the MPA proposals. The Minister said, India’s decision to consider extending support and co-sponsoring the MPA proposals is driven by conservation and sustainable utilization principles and adhering to the global cooperation frameworks (such as Sustainable Development Goals, UN Decade of Oceans, Convention on Biodiversity, etc.) to which India is a signatory.
The high-level ministerial meeting was hosted by Virginijus Sinkevičius, Commissioner for Environment, Oceans and Fisheries, EU. It was attended by Ministers, Ambassadors and Country Commissioners from nearly 18 countries. The meeting aimed to increase the number of co-sponsors of the MPA proposals and reflect on a joint strategy and future actions for their swift adoption by CCAMLR.
CCAMLR is is an international treaty to manage Antarctic fisheries to preserve species diversity and stability of the entire Antarctic marine ecosystem. CCAMLR came into force in April 1982. India has been a permanent member of the CCAMLR since 1986. Work pertaining to the CCAMLR is coordinated in India by the Ministry of Earth Sciences through its attached office, the Centre for Marine Living Resources and Ecology (CMLRE) in Kochi, Kerala.
An MPA is a marine protected area that provides protection for all or part of its natural resources. Certain activities within an MPA are limited or prohibited to meet specific conservation, habitat protection, ecosystem monitoring, or fisheries management objectives. Since 2009, CCAMLR members have developed proposals for MPAs for various regions of the Southern Ocean. CCAMLR’s scientific committee examines these proposals. After CCAMLR members agree upon them, elaborate conservation measures are set out by CCAMLR.