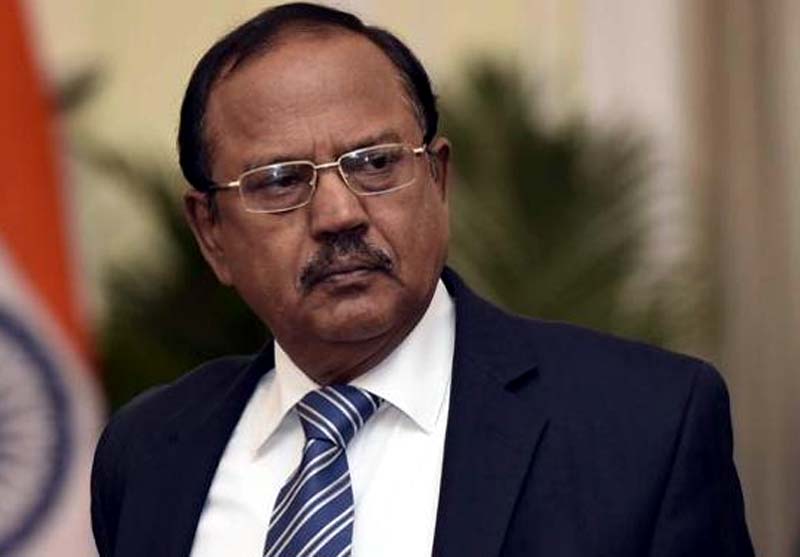 JAMMU, May 9: National Security Advisor (NSA) Ajit Doval today held detailed review of security situation in Jammu and Kashmir especially the Counter-Insurgency Grid in the Kashmir valley where top Hizbul Mujahideen commander Riyaz Naikoo was killed recently among other militants but some Army, police and paramilitary personnel have been martyred.
Doval carried out a complete operational review of the security situation with top Army Commanders and paramilitary forces in New Delhi and discussed measures to further tighten the Counter-Infiltration Grid along the Line of Control (LoC) with Pakistan, and the Counter-Insurgency Grid in the valley.
Official sources said Doval also took note of the increased air activity by Pakistan Air Force along India’s western border.
There have been reports that Pakistan army was trying to push trained militants into the Indian territory from the LoC to step-up militant activities in Kashmir, which have already gone up recently.
The meeting noted the rise in infiltration attempts from Pakistan with active support of their Army and how Pakistan was funding newly created militant outfits such as The Resistance Front (TRF) besides providing full support to Lashkar-e-Toiba (LeT), Jaish-e-Mohammed and Hizbul Mujahideen militant outfits.
Doval, who spent hours listening to the assessment of top security officials, told them that the Counter-Infiltration Grid needed to be strengthened so that no terrorist launched by Pakistan could get into the Valley unchallenged.
Security forces had been able to block many infiltration attempts in April.
The NSA also told officials to step up the engagement with militants in the Kashmir valley.
The meeting was attended by Army chief General Manoj Mukund Naravane, Intelligence Bureau Director Arvind Kumar, Research and Analysis Wing chief Samant Kumar Goel, Border Security Force (BSF) Director General SS Deswal and Central Reserve Police Force chief AK Maheshwari.
Jammu and Kashmir Police chief Dilbag Singh, Northern Army Commander Lt Gen YK Joshi, General Officer Commanding of the Army’s Srinagar-headquartered 15 Corps Lt Gen BS Raju and the Nagrota-based 16 Corps Commander Lt Gen Harsha Gupta had also flown into the national capital for the high-level review.
Doval later led a select group of top officers to meet Union Home Minister Amit Shah who was briefed about the deliberations and their findings.
A senior counter-terror official said that Doval’s meeting extensively analyzed the infiltration routes that had been used by militants from Pakistan and suggested some tweaks at the ground level that could help ensure that the infiltrating militants were detected.
Intelligence agencies have underscored that border guarding forces should be prepared for a renewed push from terror launch pads that had been activated in Pakistan-occupied Kashmir’s Dudhnial, Sharda and Athmuqam across the Keran sector on the LoC.
The meeting also took note of the frequent ceasefire violations by Pakistan, often to distract the forces while terrorists infiltrate.
According to information available with the security forces, over 400 militants affiliated to different Pakistan-based terror groups ranging from Jaish to the Lashkar-e-Toiba could be expected to try to enter the country over the next few months to raise the presence of militants in the Valley.