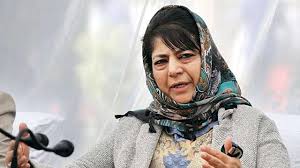 Excelsior Correspondent
Srinagar, Dec 30: People’s Democratic Party (PDP) president and former Chief Minister Mehbooba Mufti has expressed concern over the reports about families of militants being targeted by security forces and has cautioned that such methods will further deepen the alienation in Kashmir.
Click here to watch video
According to the PDP spokesmen, Mehbooba today visited various areas of South Kashmir’s Pulwama district and during her visit, the PDP president met Rubeena, who recently was arrested and tortured in custody by male police only because she was a militant’s sister.
Mufti was appraised by Rubeena’s family that her husband continued to remain under detention and has been tortured in custody.
According to the PDP spokesman, Mehbooba while assuring the family that she will take up the matter with the State Governor and Director General of Police, said that family members of the militants being innocent shouldn’t in any way be harassed. “Methods such as these have failed in the past and will fail again. Such repressive measures only deepen the alienation,” she said.
Mehbooba also demanded that militants should be dealt as individuals and their families who have nothing to do with the actions of their children should be spared and not targeted. “Police and other security forces cannot function outside the ambit of law. That will create more problems than it solves. On the one side, we have been making claims that we want to take youngsters away from violent methods but on the other hand, it seems that the Government is doing everything to push them further into this unending cycle of violence,” she said.