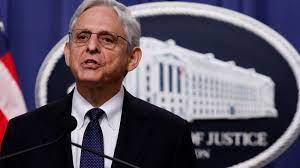 Washington, Aug 12: The US Department of Justice (DOJ) filed a motion to unseal the search warrant for former President Donald Trump’s Mar-a-Lago residence.
Attorney General Merrick Garland made the announcement days after Federal Bureau of Investigation (FBI) agents raided the Mar-a-Lago resort in Palm Beach, Florida.
Speaking at a press conference at the DOJ on Thursday, Garland said he personally “approved the decision to seek a search warrant in this matter.”
“The department does not take such a decision lightly,” he said. “Where possible, it is standard practice to seek less intrusive means as an alternative to a search and to narrowly scope any search that is undertaken.”
Trump and his allies have denounced the operation as a political attack orchestrated by Democrats while calling out the FBI and the DOJ.
Garland responded to the criticism by saying that the attacks on the “professionalism” of their agents and prosecutors have been “unfounded.”
The raid was said to have involved classified materials that Trump allegedly took with him from the White House to Mar-a-Lago, when he left office in January 2021.
The Presidential Records Act requires that all records created by presidents be turned over to the National Archives at the end of their administrations.
Some of the Trump presidential records received by the National Archives and Records Administration (NARA) included paper records that had been torn up by Trump, according to the federal agency.
In January, the NARA also arranged for the transport from the Mar-a-Lago to the National Archives of 15 boxes that contained presidential records.
Shortly later, news emerged that the DOJ had been asked to investigate Trump’s handling of White House records and whether he violated the Presidential Records Act and other laws related to classified information.
Amid the Mar-a-Lago raid on Monday, Trump issued a statement, saying that it was “not necessary or appropriate.” (UNI)