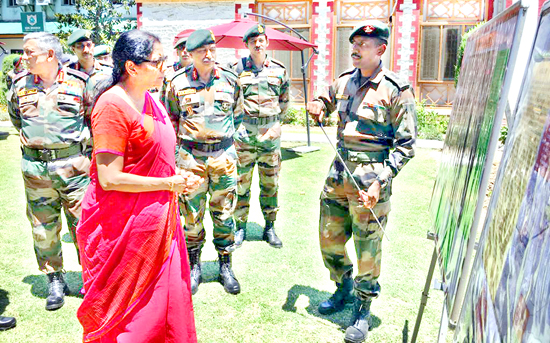 Sanjeev Pargal/
Fayaz Bukhari
JAMMU/SRINAGAR, June 25: Defence Minister Nirmala Sitharaman and Army chief Gen Bipin Rawat today reviewed operational preparedness of the troops for anti-militancy operations and annual Shri Amarnath Ji pilgrimage, which is scheduled to start on June 28 and will last two months for which fool-proof security arrangements were being made by the State Government with the involvement of multiple security agencies.
Sitharaman and Gen Rawat also visited Baltal base camp of Shri Amarnath yatra in Ganderbal district of Kashmir for review of security arrangements made for the yatris as Baltal route, which is far shorter than traditional Chandanwari route, is used by more pilgrims and witnesses heavy rush during initial days of pilgrimage. They conducted aerial recce of Pahalgam track.
The Defence Minister and the Army chief inter-acted with security officials at Baltal and assessed arrangements at the base camp as well as 13 kilometers Baltal-Amarnath cave track.

Click here to Watch Video
Multiple security agencies including Army, CRPF, Jammu and Kashmir Police, Armed Police and others were involved in security arrangements for Amarnath yatra right from Lakhanpur, the gateway of Jammu and Kashmir, up to the holy cave shrine, which was located at the height of 12,756 feet from the sea level in South Kashmir Himalayas.
The Defence Minister is reported to have directed for making all possible security and other arrangements for the pilgrims, who will start thronging the base camps of Baltal and Nunwan (Pahalgam) from June 27 to undertake yatra from June 28. The pilgrimage will conclude on August 26 coinciding with Shravan Purnima and Raksha Bandhan.
Army, it may be mentioned, will man heights of Shri Amarnath Ji cave shrine and twin tracks along with para-military forces and Jammu and Kashmir Police. Both Centre and State Governments were taking no chances with security of the pilgrims due to increased militancy in South Kashmir and keeping in view last year’s attack on pilgrims’ bus in which eight yatris were killed and scores of others were injured.
Nirmala asked security forces to constantly review and identify gaps in the security arrangements and ensure swift and targeted operations for secure environment in the State.
The Defence Minister along with Governor NN Vohra reviewed security for annual Amarnath Yatra and overall situation in the State and along the LoC with top security forces officials at a high-level meeting here at Raj Bhawan today.
Sitharaman, during the review meeting, advised the security forces to constantly review and identify gaps in the security arrangements. She stressed for swift and targeted operations on the ground for creating secure environment in the State.
The Defence Minister asked the security forces for a secure environment to enable a smooth Yatra and that will encourage maximum tourist arrivals in the State.
Sitharaman stressed that all security forces must act with complete synergy to achieve effective security on the ground for annual Amarnath Yatra that begins later this week.
During the meeting, the Governor apprised Defence Minister of very good coordination between all the security forces operating in the State. He said the State police will continue to review the ground arrangements in the coming days, to ensure effective security.
The meeting was attended by Chief of Army Staff General Bipin Rawat; Advisors to Governor BB Vyas and Vijay Kumar; Chief Secretary, BVR Subrahmanyam; DGP SP Vaid; GOC-in-C, Northern Command, Lt. General Ranbir Singh; GOC 15 Corps Lt. Gen AK Bhatt; Additional Secretary to Defence Minister Jiwesh Nandan and Principal Secretary to Governor Umang Narula.
Earlier, the Defence Minister reviewed security along the LoC and Kashmir valley with top Army Commanders at Badami Bagh Army Headquarters of 15 Corps.
Accompanied by Army chief General Bipin Rawat, Sitharaman was briefed about the security and administrative arrangements for the upcoming Amarnath Yatra on ground.
She was briefed by Chinar Corps Commander Lt Gen AK Bhatt on latest security scenario in Kashmir valley and Counter infiltration and Counter militancy operations undertaken in the Valley.
The Defence Minister was briefed about infiltration bids that were foiled along the LoC this year. She was told that around 250 militants are waiting on the launch pads along the LoC in PoK for infiltration. She was told that the counter-infiltration grid has been further strengthened to thwart the infiltration attempts and troops are on high alert and are regularly patrolling the LoC.
Sitharaman was briefed about the situation on the ground and was told about the successful operations that were conducted by the troops in Kashmir this year. She was told that there are around 275 militants operating in Kashmir and troops are exerting pressure on them. She was told that the troops on the ground are trying their best to minimize the collateral damage caused due to stone pelting during the anti-militancy operations.
She was also told about local youth joining militancy but was assured that troops along with the other security agencies are trying to bring back these youth to the mainstream and arrest the trend.
The Defence Minister appreciated the effectiveness of the Intelligence and Operational Grids and commended the commanders and troops for the excellent operational successes, which has contributed significantly towards improving the security environment in Kashmir valley.
The Army Commanders gave a detailed briefing to the Defence Minister on militancy-related situation in the Kashmir Valley as also along the Line of Control (LoC) and security arrangements made for Shri Amarnath Ji yatra.
In a couple of tweets, Sitharaman said she was given an update on effective Intelligence Girds and successful counter-infiltration and counter-terrorism operations undertaken in the recent past, which have contributed towards improving the security situation in the Kashmir valley. She was also briefed on security and administrative arrangements made for the upcoming Amarnath yatra.
Sources said the Defence Minister reviewed recent successful operations against the militants after the end of month long Ramzan ceasefire in the State and called for neutralizing the militants and taking steps to ensure that more militants don’t manage to infiltrate into the Indian territory from the LoC.
This was Nirmala Sitharaman’s second visit to Jammu and Kashmir during last six days. On June 20, she had visited residence of Army martyr Aurangzeb at Salani, Mendhar in Poonch district and later visited LoC in Krishna Ghati sector to review the situation.
Only yesterday, Army, CRPF and Jammu and Kashmir Police had gunned down two militants including a top commander of Lashkar-e-Toiba (LeT) while another had surrendered. Prior to that, four top militants were killed in Anantnag.