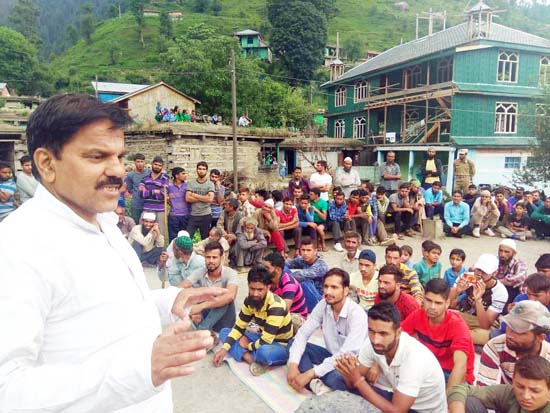 Excelsior Correspondent
UDHAMPUR, June 25: Former minister and Panthers Party Chairman Harsh Dev Singh today said that with the baggage of mistrust carried by BJP having become murkier and cumbersome, the people were impatiently waiting for the early announcement of Parliament and Assembly elections in the J&K State.
Addressing public meetings at Khaned, Mang, Kadwa and Ponara in Ramnagar constituency today, Harsh Dev said those who were swayed by the hollow promises and seductive slogans had seen through the real face of the BJP and were desperately waiting to teach their mandated leaders a life time lesson.   He said that not only were the people of Jammu cheated by the BJP over the false promises made by it but were extremely antagonized over the complete disregard for their honour and pride which the Dogras valued more than their lives.
Making mention of the unwholesome compromises made by BJP for power including those on Art 370 and 35A, Singh said that herculean efforts would have be made to strengthen the multiple dents inflected upon Dogra honour by these self proclaimed champions of Jammu.
“While FIRs were lodged against Army and CRPF and amnesty granted to anti-nationals and stone pelters, the BJP and its cheer leaders remained tight lipped. Where were they who swore by the sovereignty and nationalism at the drop of hat and nailed anyone and everyone for not doing enough for the security forces and for nationalist people. The so called champions made one surrender after the other under the smoke screen of national interest during their 3 ½ year rule”, said Harsh Dev.
He said several obnoxious overtures  of BJP  included abandonment of Sainik Colony project in Kashmir, shelving of separate KP township project in Kashmir on the dictates of separatists, re-naming of Hari Parbat as Kohi-e-Maran, introduction of Kashmiri language as a subject in Jammu Colleges, refusal to grant Dogra certificate, provision of  huge security to separatists and anti-nationals, compensation to NoKs of stone pelters and militants, refusal to grant ex-gratia to  martyrs,  dilly dally over eviction of Rohingyas and Bangladeshis illegally settled in Jammu, allocation of all 10,000 posts of SPOs sanctioned by Union Govt in favour of Kashmir besides utter discrimination against Jammu youth in the matter of appointments to Govt  jobs especially by PSC.
With BJP’s balloon having got deflated, it was NPP alone which could fill the void and provide on alternative to the people of Jammu region, Singh maintained.