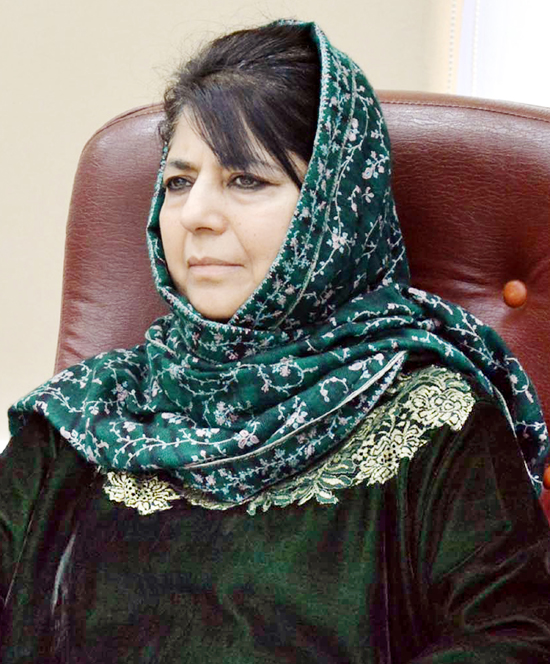 Excelsior Correspondent
JAMMU, Feb 19: Chief Minister, Mehbooba Mufti has underlined the need for blending long term and short solutions for streamlining urban transport in the State in view of the increasing vehicular population.
Chairing a high-level meeting here today, she described traffic management and urban mobility as the critical areas which need a focussed attention during policy formulations.
Mehbooba directed the Divisional Commissioners of both the provinces to lead an inter Departmental response in clearing encroachments on the roads, laying out of route plans and proper management of vehicular population in the State. She asked the Municipal authorities of Jammu & Srinagar to make registration of road vendors compulsory and relocate them appropriately to smoothen the traffic movement in the two cities.
Mehbooba asked the concerned agencies to consult and refer to the progress made in water transport mode since her taking up the idea with the Centre last summer. She also directed projectising junction management at critical spots in the cities and towns so that the problem of traffic jams is addressed timely.
The Chief Minister, during the meeting, was informed about various measures being taken to address urban mobility issue in the State. She was briefed about the pace of work on parking slots across the State, intelligent traffic system and decongesting traffic in critical areas in the two cities of Jammu and Srinagar and other places.
The meeting was informed that 1.20 lac vehicles are added to the roads every year in the State, 80% comprising of two wheelers. And with the completion of multi tier parking slots, the traffic mess would be addressed by a great measure, the meeting was informed.
The meeting was also informed that water transport system has the potential to offset 30% of trips besides reviving the heritage quotient of the two cities. The concerned agencies have identified 10 routes in this regard which are being given a re look, the meeting was told.
Minister for Transport Sunil Sharma, Chief Secretary, B B Vyas; Financial Commissioner, Housing & Urban Development Department, K B Aggarwal; Principal Secretary to Chief Minister, Rohit Kansal; Commissioner-Secretary, R&B, Sanjeev Verma; Divisional Commissioner, Jammu, Hemant Sharma; Secretary, Transport, M. Raju; Transport Commissioner, Saugat Biswas; IGP, Traffic, Basant Rath and other senior officers were present in the meeting.