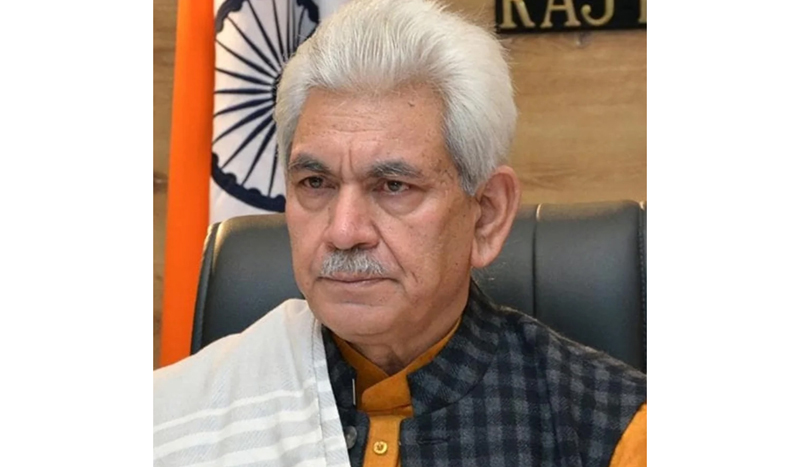 ‘Pilgrims will return with good experience’

JAMMU, June 22: Lieutenant Governor Manoj Sinha said today that all arrangements have been made for annual pilgrimage of Shri Amarnath Ji shrine, beginning June 30 for 43 days.
Speaking to Doordarshan, Sinha said Shri Amarnath Ji pilgrimage has not only religious aspects but economic also and the Government is confident that the yatris coming to Jammu and Kashmir will return with good experience.
“Due to COVID-19, the pilgrimage couldn’t be held for last two years. Disciples of Lord Shiva are spread all across the country. They will come to Jammu and Kashmir. We have made good arrangements for the pilgrims. We hope the yatris will return with good experience,” he said.
Asserting that 99 percent work for Shri Amarnath Ji pilgrimage has been completed, the Lieutenant Governor said adding construction of only some toilets was pending which will take 2-3 days.
He added that all works will be completed well ahead of the Pilgrimage.
“All measures for disaster management like emergency evacuation through helicopters have also been made. The teams of disaster management have reached here,” Sinha said.
He said underground cabling has been laid for improved electricity supply on the tracks of Shri Amarnath Ji shrine in South Kashmir Himalayas.
Adequate number of community toilets and sanitation facilities have been made on the tracks. For good connectivity, optical fibers have been laid, he added.
Meanwhile, a joint conference of senior Army, police and civil officers was held here today to review security arrangements for upcoming Shri Amarnath Yatra.
The Tiger Division of the Army conducted the joint Security Coordination Conference, which was co-chaired by General Officer Commanding, Rising Star Corps, Lt Gen Pushpendra Singh and Additional Director General of Police Mukesh Singh, to coordinate operational preparedness of security forces in Jammu and Samba districts.
The 43-day-long yatra to the 3,880-metre-high holy cave shrine of Amarnath is scheduled to start on June 30 from the twin routes — traditional 48-km Nunwan in south Kashmir’s Pahalgam and 14-km shorter Baltal in central Kashmir’s Ganderbal.
“Threat perception and security arrangements for the yatra were discussed during the high-level meeting,” a spokesman said.
He said the conference was attended by Divisional Commissioner, Jammu, Ramesh Kumar, Deputy Commissioners of Jammu and Samba, along with Inspector General-level officers from BSF, CRPF, Deputy Director from State Intelligence Bureau, Formation Commanders and Brigade Commanders of Jammu and Samba.
Officials said police and CRPF personnel have started taking positions in and around Yatri Niwas, the main camp for the pilgrims at Bhagwati Nagar here.
Officials said CRPF personnel and police will jointly guard the camp to ensure the safety of the pilgrims during the pilgrimage.
The first batch of the pilgrims will leave for the twin base camps of Nunwan-Pahalgam and Baltal one day ahead of the start of the pilgrimage, marking the beginning of the yatra from Jammu.
Sadhus have also started arriving from different parts of the country at the historic Ram temple in the old city for the pilgrimage.
“The holy pilgrimage is taking place after a gap of two years due to COVID-19 outbreak and we are here to join the yatra,” a Sadhu said, expressing satisfaction over the arrangements at the temple having a capacity to accommodate over 4,000 Sadhus.
The Sadhus said they are looking forward to a peaceful pilgrimage.