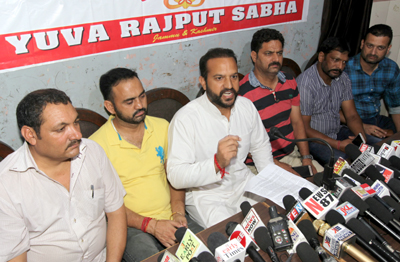 Excelsior Correspondent
JAMMU, Aug 4: Director, Industries and Commerce, Jammu Dr. Ravi Shankar Sharma chaired a meeting today to review the working of all District Industries Centres in the Jammu Province as well as Trade Facilitation Centre, Poonch. Several important issues pertaining to setting up of industries were discussed in the meeting.
He directed all the General Managers of DICs to implement Ease of Doing Business Action Plans and also implement the recent Government instructions regarding Aadhaar Enabled Bio-metric Attendance System. It was informed that there is complete compliance in all DICs regarding Biometric Attendance.
He also instructed the General Managers of DICs to set up a Facilitation Cell in each DIC which will guide the potential young entrepreneurs regarding all procedures for setting up of industries. The General Managers of DICs were also asked to immediately frame committees for identifying strengths and opportunities for industrial development of each district. Such teams would identify the local resources available in the districts and the available skills, so that the potential entrepreneurs can have access to scientific data regarding the industrial opportunities available in each district.
In this regard the raw material being imported by the existing units from outside the State shall also be assessed to identify items which can be manufactured within the State itself. Custodian, Trade Facilitation Centre, Poonch was directed to immediately make the online roster for the facilitation of traders.
Several other projects of land acquisition and industrial development were also discussed. The performance of Prime Minister Employment Generation Programme was also reviewed district wise and the Director, I&C urged the General Managers of DICs to achieve their targets by the end of November of the current financial year.
Several other issues like making DICs more entrepreneur friendly, clearance of all pending incentive cases, all the pending cases of SRO- 43, RTIs, Public Services Guarantee Act and Grievance Cell complaints were also discussed in the meeting.
The meeting was attended by Joint Director (M&P), Joint Director (Dev), Chief Accounts Officer, Directorate of Industries and Commerce, Jammu, General Managers of various District Industries Centres of Jammu Province, Custodian, Trade Facilitation Centre, Chakan-Da-Bagh, Poonch, Assistant Director (Dev) and various other officers of Directorate of Industries and Commerce, Jammu.