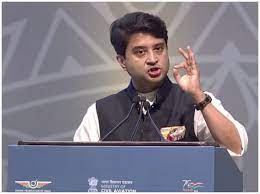 NEW DELHI, Dec 1: Passenger data shared for DigiYatra will be saved in an encrypted format in a decentralised manner, according to Civil Aviation Minister Jyotiraditya Scindia.
The government on Thursday launched DigiYatra, which is based on facial recognition technology for air passengers, at Delhi, Bangalore and Varanasi airports.
DigiYatra will be launched at four more airports — Hyderabad, Pune, Vijayawada and Kolkata — by March next year.
Later, DigiYatra will be rolled out at other airports in the country, Scindia said at a briefing here.
It will be available for passengers taking domestic flights.
At Delhi airport, DigiYatra will be available for passengers taking domestic flights from Terminal 3 (T3).
Scindia said DigiYatra data is stored in a decentralised manner.
The minister was responding to queries about the privacy of data shared for DigiYatra.
The data will be saved in an encrypted format and blockchain technology is being used. The data is stored in passengers’ phones and the data shared with the airport is purged 24 hours after the journey, the minister said.
DigiYatra is based on facial recognition technology and will make the boarding process faster and seamless.
Further, DigiYatra will ensure enhanced security at the airport as the passenger data is validated with airlines departure control system and only designated passengers can enter the terminal. (PTI)