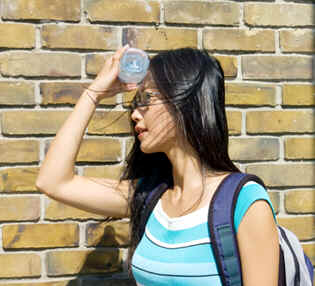 When the summer sun rises to its pristine glory, one cannot remain oblivious of the fact that the same sun which we worship, the God, the benefactor of all the living beings, the source of life’s warmth and enormous solary energy does not refrain from showing its wrath whenever we forget to observe the precautions laid down to avoid sun strokes particularly if some of us are already susceptible on account of an underlying disorder like Diabetes Mellitus.
The sun which blesses with the light and warmth of life is also capable of extinguishing the very flame of life nurtured by it if one fails to observe necessary safeguards against the summer heat particularly when one is suffering from a vulnerable affliction like Diabetes and more so in case of unacclimitised individuals like for example the dispalced Kashmiri Pandit Diabetics.
It is well known that some people can withstand the severity of seasonal heat and humidity better while others cannot. The individual vulnerability gets further enhanced especially in the presence of Diabetes on account of a number of factors. For example, Diabetes leads to a reduction in general physical resistance and perseverance. Second, because of the consequent sequential changes like neuropathy, alteration in sweat gland response and changes in skin itself, Diabetes makes an individual more susceptible to heat stroke and heat exhaustion.
Avoid Venturing Outdoors
As a matter of fact, the advice for all the Diabetics is that they must avoid moving outdoors during extremes of temperatures, that is, both during extreme heat wave as also during extreme cold wave in winter months. Exposure to such extremes of temperature can also sometimes trigger a heart attack in a Diabetic particularly when he or she belongs to elderly age group. However, it is worthwhile mentioning that direct exposure to sun is not always absolutely essential for a heat stroke to take place which can sometimes also occur indoors if there is high percentage of humidity coupled with heat in a poorly ventilated over-crowded room.
Consume Plenty of Fluids
Diabetics are advised to observe certain basic safeguards. These include wearing clothes which donot interfere with evaporation of sweat from the body, avoiding over-crowded enclosed spaces and avoiding hectic muscle activity which is liable to generate excessive body heat.
A very important tip is to consume plenty of fluids even without thirst during the hot weather. Diabetics are expected to exercise discretion while choosing beverages and soft drinks although of late there have appeared certain soft drinks which contain artificial sweeteners and are specially formulated for Diabetics. However, the best choice is to have lots and lots of fresh lime juice containing a pinch of salt sweetened by adding “sugar-free” tablets.