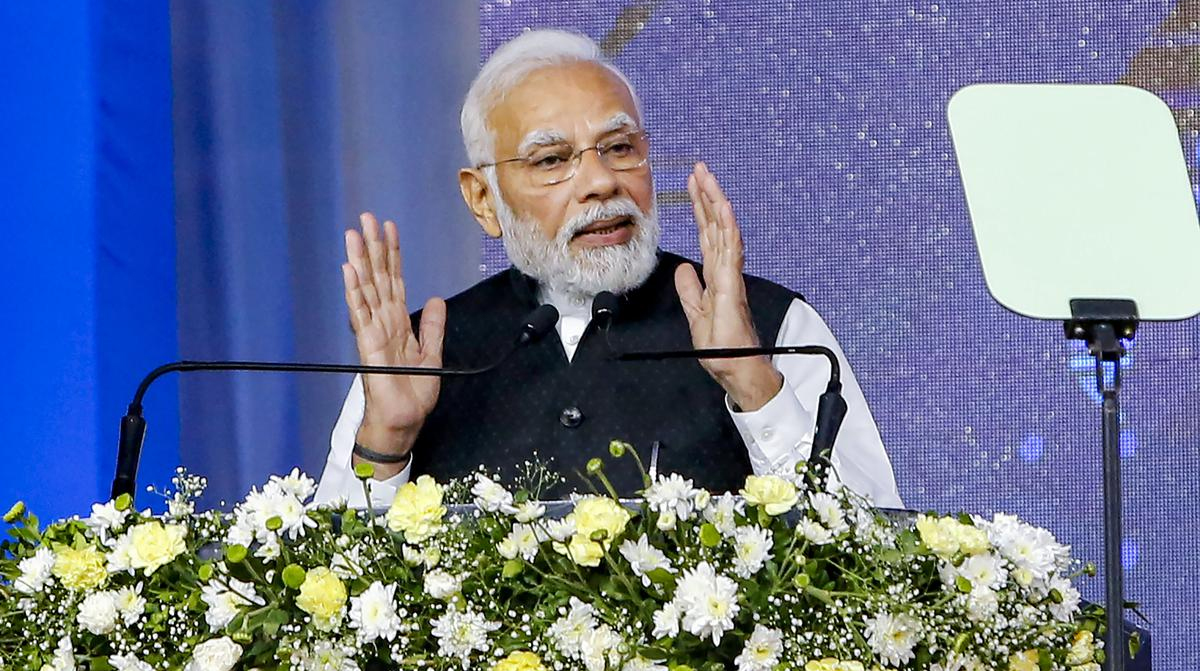 JAMMU, Aug 6: Prime Minister Narendra Modi has said that the decision of August 5 (2019) is firm and the determination to take the Union Territories of Jammu and Kashmir and Ladakh on a new path is also unshakable which has resulted into new opportunities for youth and empowerment of villagers.
He stated this in four page special edition on Jammu and Kashmir titled ‘A New Dawn of Development’ in latest issue of ‘New India Samachar Magazine’ uploaded by the Press Information Bureau (PIB) on third anniversary of abrogation of special status of erstwhile State of J&K and its bifurcation into two UTs of J&K and Ladakh.
“For us, the decision of August 5 is firm and the determination to take Jammu and Kashmir, and Ladakh on a new path is also unshakable. On August 5, the entire Constitution of India came into force in Jammu and Kashmir, the entire law came into force, and we removed the biggest obstacle in development of Jammu and Kashmir and Ladakh for 70 years,” the quotes attributed to Modi in the magazine, said.
Modi said there would be a fresh impetus to employment and prosperity in the areas of J&K.
Three years ago, on August 5, the concept of `Ek Bharat-Shreshtha Bharat’ was further strengthened when Prime Minister Narendra Modi-led Government, bridging the gap of decades, removed Article 370 from Jammu and Kashmir and Ladakh, which were left behind in the race for development.
“In the last three years, this region has progressed rapidly on the path of development along with rest of the country and new dawn of development is visible in the nation as well as in Jammu and Kashmir and Ladakh”.
Through various schemes at the rural level, villagers are being empowered by giving them new means of employment and opportunities. The recruitment drive is going on in a big way in a transparent manner for employing qualified candidates, the magazine said in its column on ‘New Opportunities for Youth of J&K’.
It said Mumkin, Tejaswani, Rise Together, Volunteer Programme are giving opportunities to the youth to move forward. Placement initiatives in the corporate world with the help of platforms like Avsar and facility to help 100 administrative service aspirants in Jammu and Kashmir.
It also quoted Union Home Minister Amit Shah as saying: “Kashmir resides in the heart of Prime Minister Narendra Modi, whenever he talks, he says whether all the schemes are reaching properly or not, he asks whether the benefits of all the schemes reach Jammu and Kashmir like the rest of the States of India or not.”.
At the same time, the new Jammu and Kashmir and Ladakh are also determined to come out of the shackles of the past, which is strengthening its present and preparing itself for the future.
Earlier, militants dominated Pulwama and now AIIMS is being built in Pulwama at a cost of Rs 2000 crore. Colleges were closed for the youth, today IIT, NIFT etc are coming up at a cost of about Rs 900 crore. Along with this, two AIIMS and Medical Colleges have also come up.
“Record number of tourists arrived by air. From October 2021 to March 2022, more than 79 lakh tourists visited Jammu and Kashmir. In December 2021 alone, the number of passengers arriving at Srinagar airport exceeded 3.24 lakh. Seventy five offbeat tourist centers are being developed. Tourism was promoted by organizing houseboat festivals, Sufi program, literature and other festivals,” the special edition on J&K said.
It also referred to the end of 150-year old Darbar Move practice in Jammu and Kashmir saying due to two bi-annual capitals, all the goods were shifted by trucks, leading to heavy expenditure.
“Panchayati Raj Law was implemented at all three levels. District Plan was approved for all 20 districts and the budget doubled to Rs 12,600 crore. Insurance cover of Rs 25 lakh was provided to public representatives and their families. A campaign has been started to make the Government work completely paperless. One thousand Gram Panchayats have been connected with BharatNet,” it added.
In a column `Equality and Justice to All’, it said by changing the provisions of reservation, its ambit was expanded. Four percent reservations were given to Pahari speaking people and 10 percent to Economically Weaker Sections, its coverage for Other Social Classes was increased from two to four percent. The coverage of people living near the LoC and the border was increased from 3 to 4 percent.
“Income limit for reservation for OBCs has been increased from Rs 4.5 lakh to Rs 8 lakh. Tribal reservation in Assembly seats has been given according to population, So far, 5,36,4336 Permanent Resident Certificates have been issued,” it read.