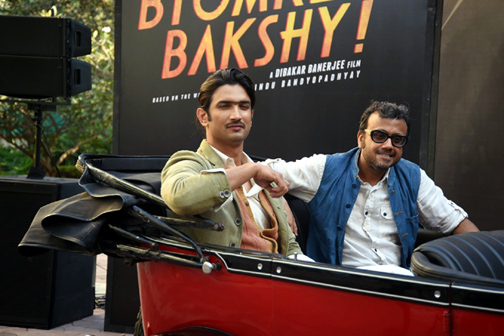 Even though the film rests solely on his
shoulders, the haphazard script acts as a
spoiler in his performance as well. But,
Sushant tries his level best to escape unscathed. Anand Tiwari plays his role with ease, so does Meiyang Chang who plays his ‘part’ effectively.
2 First things first. Leaving a handful of filmmakers, there are hardly any filmmakers who really like to ‘risk’ their stocks with period films. And given today’s time and age, making a period film really means burning the midnight oil for nights together and getting the research right and recreating the respective era. This week’s release DETECTIVE BYOMKESH BAKSHY! is one such film that belongs to the ‘period’ genre. Will this film actually move and shake the Box-Office windows or will it turn out to be a damp squib, let’s analyze.
The film starts off with a night of November 1942 in Calcutta, with a narrative by Detective Byomkesh Bakshy (Sushant Singh Rajput). When he is busy playing in the sports room, Ajit Banerjee (Anand Tiwari) approaches him to solve the case of his missing father Bhuvan. Then, a very practical Byomkesh Bakshy tells him that he doesn’t want to accept this case and gives him all the possibilities of his father to have gone missing. A very upset Ajit, then, slaps him in front of everyone. The very next moment, we see Byomkesh Bakshy taking up the case and trying to recreate all sorts of possibilities, which could lead him to cracking the case. And when Byomkesh Bakshy really gets to searching by going hammer and tongs over the case, he lands up discovering that Bhuvan had not gone missing, but had been mercilessly murdered. And then starts his journey to find the killers of Bhuvan. As and when the case progresses, he keeps on meeting various characters, who in turn, lead to various twists and turns in the film, which also includes merciless murders at regular intervals. In the meanwhile, while he is investigating the case, a very seductive Devi/ Anguri (Swastika Mukherjee) tries her level best to seduce him. As the case progresses, Byomkesh Bakshy, suddenly, chances upon a very mysterious map.
What is the mystery of the map, does Byomkesh Bakshy become successful in nabbing the culprit of Bhuvan, the reason behind his assassination and also the culprit behind the series of murders and the reason for their murders is what forms the rest of the film.
As far as the film is concerned, even though it’s a whodunit thriller, the thrill of watching a thriller gets lost midway through the film. In the name of a whodunit genre, the film goes overboard totally, thus, resulting into the film falling flat on the face. And the only person who needs to be blamed for this is the film’s director Dibakar Banerjee, alongwith the film’s joint writer Urmi Juvekar. It’s very shocking to see a film like DETECTIVE BYOMKESH BAKSHY! suffer a low stature and that too coming from a man who gave us stellar films like SHANGHAI, LSD: LOVE, SEX AUR DHOKHA, OYE LUCKY! LUCKY OYE, and KHOSLA KA GHOSLA. The trademark ‘Dibakar’ touch is heavily missing in the film. While the film has a slow first half, its second half is endlessly dragged to the core. In an attempt to make a thriller, it seems that Dibakar landed up infusing too many elements, which leaves the film in a very bad taste.
As far as the performances are concerned, it’s a film that clearly belongs to Sushant Singh Rajput and his antics. Even though the film rests solely on his shoulders, the haphazard script acts as a spoiler in his performance as well. But, Sushant tries his level best to escape unscathed. Anand Tiwari plays his role with ease, so does Meiyang Chang who plays his ‘part’ effectively. Even though Neeraj Kabi does get a meaty part in the film, there are times when his performance lands up being translated into hamming. As far as the female leads (Swastika Mukherjee and Divya Menon) are concerned, they hardly have anything to do in the film, except for appearing in crucial moments of the film and help in to move forward. The rest of the characters help in moving the film forward.
The film scores very heavily in its breath taking production value (Vandana Kataria), who is definitely a name to watch out for in this department. Even the film’s music (Sneha Khanwalkar, Dibakar Banerjee, Madboy/Mink, Blek, Mode AKA, Joint Family, IJA, Peter Cat Recording Co. – PCRC) comes across with a likeability factor attached to it. The film also scores in the sound department (Allwin Rego, Sanjay Maurya) (a handful of out of sync dialogues notwithstanding). Special brownie points to the film’s cinematography (Nikos Andritsakis) for making the film look visually appealing. Because of the ‘entangled’ script, even the film’s editors (Namrata Rao, Manas Mittal) couldn’t do much.
There are many factors which may make the film struggle at the Box Office. A few of them include unwanted violence (esp. in the second half), a plot that went haywire and also too much of thriller elements. Generally, any kind of murder mystery comes with a sinister motive, which gets revealed towards the end. But, in the case of DETECTIVE BYOMKESH BAKSHY!, the film gets dragged on endlessly, even after the culprit has been identified!
On the whole, DETECTIVE BYOMKESH BAKSHY! can be skipped, without any regrets.
courtesy :http://www.bollywoodhungama.com/