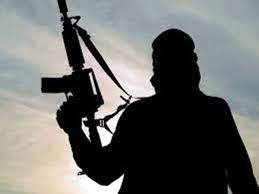 I t is now more than 32 years , Pakistan sponsored, funded, motivated and armed militancy has been afflicting the fabric of Jammu and Kashmir , in particular Kashmir where the belligerent neighbour has been playing with the sentiments of some groups and indoctrinating young gullible persons in order to taking to arms and ”fight” for some illusive and chimerical goal. Since this is a brazen proxy war fought by Pakistan where the ”enemy” does not dare challenge the security forces in the open but entirely in a stealthy and hit and run type and operating mostly from hideouts, usually it takes a longer period before it is completely rooted out. The cycle of operation of the ”advent” and the fall of terrorism wherever it surfaced globally, reveals within exactly which period it kneels, wanes and finally caves in as if it never existed. Jammu and Kashmir, undoubtedly in this respect, in its own right , can claim to be having comparative superiority in internal security machinery in fighting out Pakistan sponsored militancy. However, for militancy getting stretched beyond some very short period and sustaining it , different tools and off-shoots spring from it like trafficking in drugs and narcotic substances for funding terror activities which Lieutenant Governor Manoj Sinha referred to while appraising the status and the levels of wiping out militancy in specific sensitive areas of Kashmir. There is no denying the fact that the Jammu and Kashmir Police along with security forces have been taking on the challenge of militancy right from its setting in , during all these years and now are poised to wiping out it, lock stock and barrel, from maximum areas of Jammu and Kashmir although the work is yet not fully completed unless last of the militant laid his arms and joined the mainstream . It is equally most important that at no cost and under no circumstances, should any fresh process of ”recruitment” of young people by agents of the forces from across the border for joining different militant outfits, be allowed to succeed . In that direction, while it is the duty of the UT Government to play its expected concerted role, at the same time the parents and nearest relatives of such young people have far more responsibilities in preventing any ”slippage” from out of their homes for the nefarious purpose. It is to be noted with concern that the menace of militancy has brought with it and caused innumerable social and other evils to suffuse the society which the brave personnel of the Police force are fighting . It must also be admitted and our UT Police force needs to be lauded in that as compared to other states, our police force besides maintaining law and order and do normal policing also have to deal with various off-shoots and evils of militancy thus making their role and responsibilities different as dealing with social crimes, drug traffickers, smugglers, infiltrators, over ground workers of militants and the like is quite challenging . The glaring example of how one could, on the other hand, lead a prosperous and honourable life while remaining steadfastly a part of the mainstream can be seen in passing out cum attestation parade of 538 new recruits recently in Police Training Camp in Manigam, Ganderbal Kashmir who shall henceforth be donning the Khaki and shouldering the responsibilities of protecting law and policing to serve the people . They will thus be meeting also the contemporary challenges of the Police work. The point which is desired to be brought home to the misguided and misled youth who get tempted to or are forced to join the ranks of militant groups, is that remaining in mainstream shall give them a feel of the sky having no limit and there being no less opportunities in this vast country to proceed ahead, prosper and even excel in building one’s career thus living a very honourable life instead of the obverse where only a bullet someday awaits them bringing miseries to their families. Narco – militancy and other off-shoots of four decades old scourge of militancy, in the considered views of the Lt. Governor of the UT, were posing menacing challenges and the need to deal with them in a quickest period of time was extremely important otherwise it would be too late before it “takes the shape of a cancer”. Hence if the Government / the security forces and other agencies wanted to root out the remaining residual signs and presence of militancy to be completely eradicated , its off-shoots must be destroyed in an aggressive mode and mission. All round development, peace and progress , it may be noted, are concomitants of a secure environment