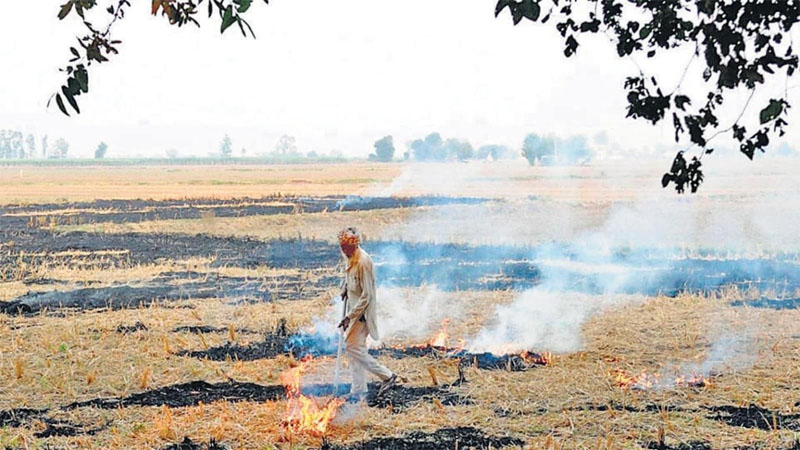 CHANDIGARH/NEW DELHI, Sept 15:
The Delhi and Punjab Governments have joined hands to use Pusa bio-decomposer — a microbial solution that can decompose paddy straw in 15 to 20 days — on 5,000 acres of land in the agrarian state to prevent stubble burning which is a major cause of air pollution.
The move comes days after the Centre rejected the request of AAP Governments in the two states to help them provide cash incentives to farmers in Punjab for not burning stubble.
As part of a pilot project to be implemented with the help of the Indian Agricultural Research Institute (IARI), bio-decomposer will be sprayed over 5,000 acres or 2,023 hectares of land in Punjab.
This year, the total area under paddy cultivation in Punjab is pegged at 29-30 lakh hectares. The state on an average generates around 20 million tons of paddy straw annually.
“Joint meeting with Punjab Agriculture Minister Kuldeep Dhaliwal ji and officials of IARI Pusa regarding stubble pollution. Free spraying of bio-decomposer will be done in some areas of Punjab as a pilot project this year under the supervision of IARI,” Delhi Environment Minister Gopal Rai tweeted.
Dhaliwal met Delhi Chief Minister Arvind Kejriwal and Rai on Wednesday night in New Delhi and discussed ways to resolve the stubble burning issue.
In July, the Delhi and Punjab Governments had jointly sent a proposal to the Centre and the Commission for Air Quality Management to help them give cash incentive to farmers in the agrarian state for not burning stubble.
Farmers say a cash incentive can help them cover the cost of fuel used in operating the machinery for the in-situ management of paddy straw.
According to officials of the Punjab Government, the Centre rejected the proposal saying it has been providing susidised machinery to farmers, such as happy seeder, rotavator and mulcher, for the in-situ management of paddy straw and that it didn’t have money to dole out cash incentives.
Punjab Agriculture Minister Dhaliwal said under the process, a Pusa bio-decomposer will be sprayed on stubble following which the crop residue gets mixed in the soil.
He said the Punjab Government has made adequate preparations to prevent pollution caused by paddy stubble. Equipment are being provided to farmers on subsidy, awareness and surveillance teams have been formed in all districts, according an official statement issued by the Punjab government.
Targeting the Union Government for “turning down” cash incentive proposal to farmers for not burning stubble, Dhaliwal said the State Government had proposed to give Rs 2,500 per acre to paddy growers suggesting that the Centre should bear Rs 1,500 of the proposed amount.
He said a massive awareness drive will be launched in the rural belt of Punjab, comprising officials of the Department of the Rural Development and Panchayat and the Punjab Pollution Control Board to persuade farmers to manage the stubble.
Dhaliwal urged farmers to give fulsome support to the Government to protect the land, air and water so that the future generations could enjoy a clean environment.
The Delhi Government will be using the bio-decomposer prepared by IARI on agricultural land in the outer areas of the state for the third year on the trot.
The Pusa bio-decomposer was sprayed on 4,300 acres of land belonging to 844 farmers in Delhi last year. In 2020, 310 farmers had used it on 1,935 acres of land.
According to officials, spraying of bio-decomposer costs just Rs 30 per acre.
In 2021, a third-party audit conducted to ascertain the impact of the microbial solution in Delhi showed that it was 95 percent effective, following which Kejriwal had requested the Centre to distribute it free in neighbouring states.
Along with unfavourable meteorological conditions, paddy straw burning in Punjab and Haryana is a major reason behind the alarming spike in air pollution levels in the national capital in October and November. Farmers set their fields on fire to quickly clear off the crop residue before cultivating wheat and potato.
According to the IARI, Punjab had reported 71,304 farm fires between September 15 and November 30 last year and 83,002 farm fires in the corresponding period in 2020.
Last year, the share of farm fires in Delhi’s PM 2.5 pollution had peaked to 48 per cent on November 7. (PTI)