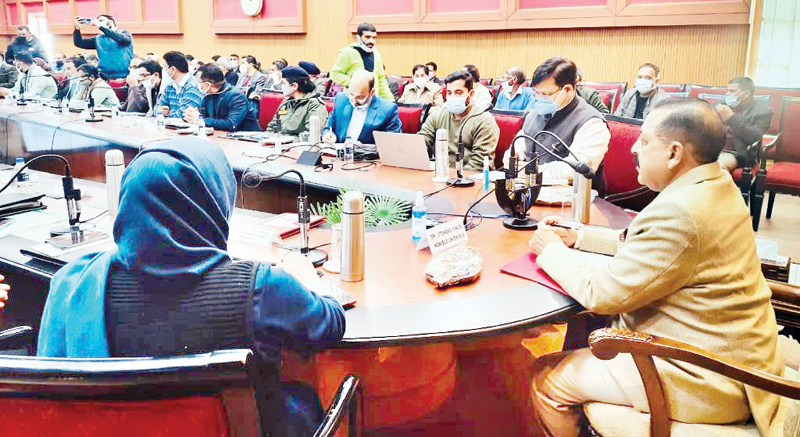 ‘Lavender Cultivation’ under Aroma Mission to be started in Ramban

JAMMU, Feb 20: Union Minister of State (Independent Charge) Science & Technology; Minister of State (Independent Charge) Earth Sciences; MoS PMO, Personnel, Public Grievances, Pensions, Atomic Energy and Space, Dr Jitendra Singh today said that the elected representatives are the key players in defining the priority areas for development in their jurisdiction. He said that not only are they accountable to people for the developmental initiatives locally but also play an important role in highlight the lacuna in implementation in various schemes thus acting as a bridge between people and administration. He said this while chairing the District Development Coordination & Monitoring Committee (DISHA) Meeting for Ramban District at Convention Centre Jammu today.
A key decision taken during the meeting was to commence Purple Revolution in Ramban District by encouraging ‘Lavender Cultivation under the CSIR-IIIM’s Aroma Mission through Ministry of Science and Technology on the lines of Doda and Reasi districts. Dr Singh made the announcement at the DISHA Meeting today while adding that since similar climatic and geographic conditions exist in Doda and Ramban, Lavender cultivation can be started Ramban to increase income sources for the youth of the district. Citing examples of Baderwah and Khilani in Doda District and certain areas in upper reached of Reasi, Dr Singh said that over 500 youth had taken benefit from the purple revolution and augmented their income many-fold . Among many such success stories, Dr Singh mentioned that there were even some of the Engineering graduates had given up there jobs and taken to lavender cultivation which offers a lucrative avenue and is fetching the youth with appreciable profits. Since Ramban too had similar potential for Lavender cultivation under Ministry of Science and Technology’s AROMA mission, he said, it will help in providing means of livelihood to budding farmers and agri-entrepreneurs and give a boost to Start Up India campaign and promoting a spirit of entrepreneurship in the region.
Dr Singh while reviewing the functioning of various Central Government Schemes mentioned that the DISHA platform gave an opportunity to elected representatives and executive to work together on various developmental issues for larger public interest. He said Prime Minister Narendra Modi has started very effective and well conceptualized schemes and to take full benefit of these schemes it was important to being to fore the loopholes or problems in implementation so that timely solutions can be worked out and projects may achieve the intended deadlines.
While listening to various suggestions of the PRI members and representatives of various inaccessible Panchayats and Blocks of Ramban District Dr Singh said that the district had a treacherous and hostile topography making the task of reaching out to the ‘last man’ very daunting. However, he said that the Government was resolved to face the challenge. He said that the Government was committed to provide the benefit of the schemes like PMAY, PMGSY, MGNREGA to the people living in the far off panchayats and blocks of Ramban and other difficult areas of Jammu & Kashmir. Dr Singh also lauded the efforts of district administration and PRI members for good performance in schemes like PM Kisan Nidhi, Schemes in Rural Development sector.He urged the officials of various departments to work in coordination with the PRI members and creating SOPs for better coordination and synergy so that the goal of Inclusive development can be achieved.

Respect given by Modi Govt to Gujjars unprecedented: Arshad