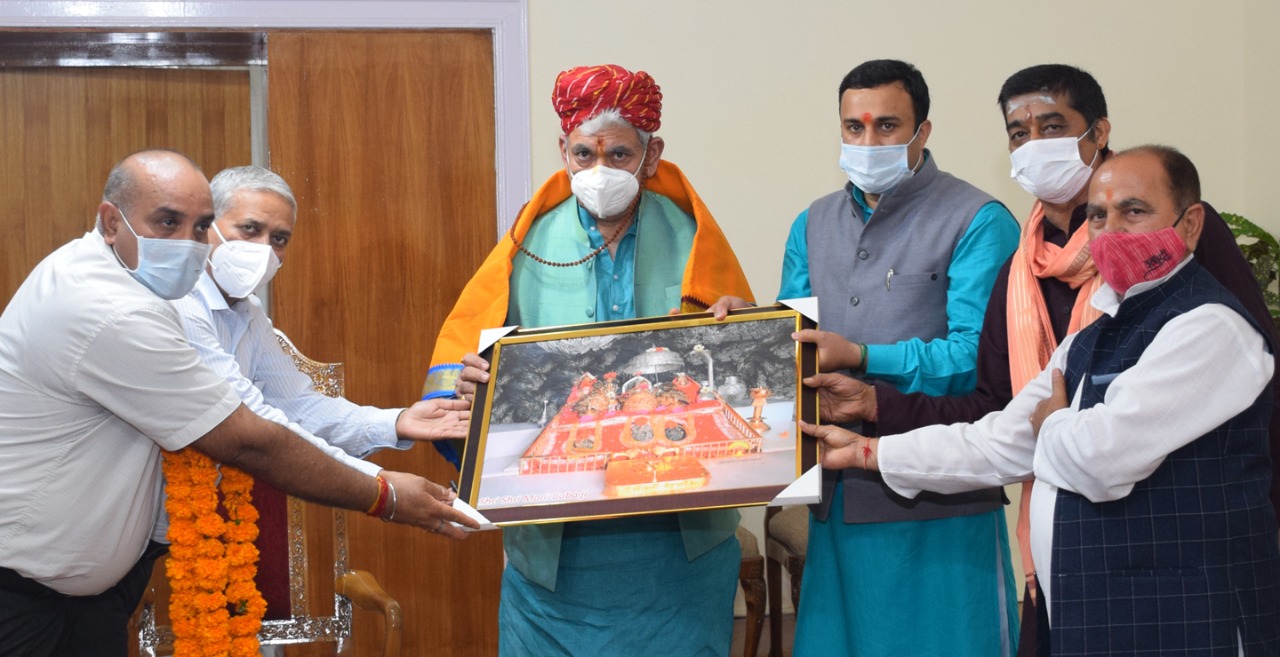 Jammu, July 30: A number of delegations including DDC Chairperson, Poonch; Doctors Association Jammu; PM Package Selectees; representatives of LJK Economic Growth and Development Dialogue (LEAD), among others called on Lieutenant Governor, Manoj Sinha here at Raj Bhavan and projected their issues and demands.
Chairperson, District Development Council, Poonch, Ms. Tazeem Akhter today met the Lt Governor and apprised him of various developmental and other issues of public importance. She highlighted the demands for a Trauma center and women college at Poonch, besides immediate augmentation of health infrastructure and posting of sufficient staff in the health facilities.
The Lt Governor, while interacting with the DDC Chairperson, observed that the government is working on many fronts for equitable development of all the regions of the UT. He assured her that the genuine issues will be taken up for consideration, and urged her to continue working for the promotion of public welfare.
Meanwhile, a delegation of Doctors led by Balvinder Singh, President Doctors Association Jammu (DAJ) called on the Lt Governor and submitted a memorandum of demands pertaining to various issues of doctors, including the issue of minimum service requirement for availing study leave for Post Graduate Courses.
The Lt Governor, while interacting with the members of the delegation, assured them that all their genuine issues would be looked into meticulously for redressal. He also appreciated the doctors’ fraternity for their tireless efforts in the fight against Covid pandemic.
Similarly, Members of Kailakh Jyotish Avim Vedic Sansthan Trust (SKJAVS), led by its President, Mahant Rohit Shastri called on the Lt Governor and projected various issues pertaining to the promotion and preservation of Sanskrit language in the UT, besides bringing all the religious places of Jammu on the Tourism Map of the UT.
Kailakh Jyotish Avim Vedic Sansthan Trust also felicitated the Lt Governor for promoting Sanskrit language in the UT. The delegation lauded the initiative of opening the Department of Sanskrit in SMVDU, Katra besides many other steps taken to promote Sanskrit language in J&K.
The Lt Governor observed that language is a cultural identity and collective efforts are required on the part of every stakeholder for its preservation and promotion.
Another delegation comprising of recently shortlisted candidates of PM Package posts also met the Lt Governor and submitted a memorandum regarding the issue of applicability of S.O.194 of 2020 to the posts created under PM package for Kashmiri Migrants.
The Lieutenant Governor gave a patient hearing to the deputation and assured that all their genuine issues would be looked into on priority.
Similarly, a delegation of LJK Economic Growth and Developmental Dialogue (LEAD) led by its Director Sunil H. Shah also called on the Lt Governor and discussed LEAD’s initiatives towards devising strategies for initiating a multi stakeholder collective action to promote investment-friendly environment and to facilitate partnerships for industrial investment for mitigating the developmental challenges of the region.
Later, Sanjeev Prabhakar, President, JRBB&H Association also called on the Lt Governor and raised various concerning issues.
The Lt Governor listened to all the issues and demands put forth by the members of delegations and assured them that their genuine issues and demands would be taken up for examination and early redressal.
He observed that the UT Government is committed to taking all requisite measures and initiatives to meet the developmental aspirations of the people of J&K.