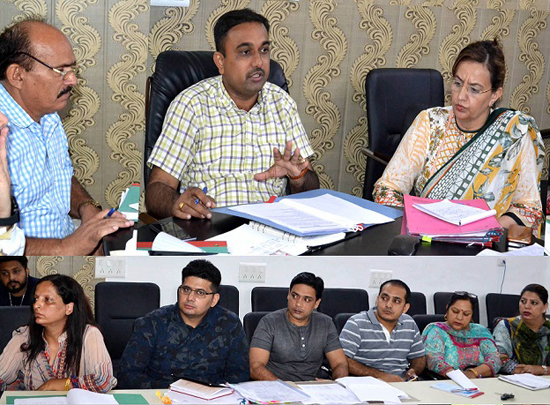 Excelsior Correspondent
JAMMU, Aug 1: Deputy Commissioner Ramesh Kumar reviewed the physical and financial achievements of Social Welfare Department and ICDS in a meeting held, here today.
ADDC Suraiya Jabeen, District Program Officer ICDS Natasha Kalsotra, District Social Welfare Officer Ranbireshwar Jamwal, CDPOs and other senior officers of the concerned department were present in the meeting.
In the meeting, DC was informed by the DPO, ICDS that department is having total 2618 anganwadi centres in Jammu district and focus is laid on two major projects that is, Pradhan Mantri   Matru Vandana Yojna (PMMVY) and Ladli BetiYojana. He was further informed that under PMMVY assistance of five thousand rupees is given to pregnant women.  Under Ladli Beti Yojna 4805 cases have been registered in Jammu District.
DSWO informed about the progress under the schemes run by the department which includes employment generation programmes, skill development programmes, pension schemes, State Marriage Assistance Scheme SMAS, Hunar and Asra.
Speaking on the occasion, DC instructed the concerned officers to work in synergy so that the needy people could get the maximum benefits from the schemes run by government.
For effective implementation of the schemes, the DC called upon the concerned officers to widen and intensify public outreach programme under various schemes.
DC directed the DSWO to work in synergy with ICDS and complete the survey list for SMAS within 15 days so that the poor and needy girls could get benefits of the scheme as soon as possible.
Laying thrust on the proper immunization, vaccination and regular health check-up of children, DC said that no child should be left out. He asked the concerned officials to adopt a pragmatic approach in fulfilling the objectives of ICDS.