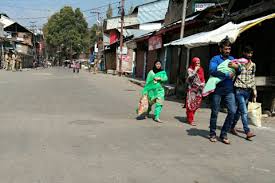 Excelsior Correspondent
JAMMU, Apr 11: Curfew continued in Kishtwar town and Army remained deployed for third consecutive day today even as no untoward incident was reported from any part of the district in the aftermath of the killing of top RSS functionary Chanderkant Sharma and his PSO Rajinder Kumar by the militants on Tuesday.
Click here to watch video
Meanwhile, curfew was lifted from Bhaderwah town while restrictions under Section 144 were also withdrawn from entire Doda district as there was complete normalcy in the district.
SSP Kishtwar Shakti Pathak told the Excelsior that curfew remained imposed in entire Kishtwar town for third day today. He said the administration decided against giving any relaxation in curfew after taking assessment of the situation.
There were no protests in any part of Kishtwar today, he said, adding that Army remained deployed in the town along with para-military Central Reserve Police Force (CRPF) and police.
Sources said youth at couple of places in Kishtwar town tried to take out protest marches but their attempt to defy curfew was foiled by the police and paramilitary personnel.
According to sources, authorities decided not to give any relaxation in curfew in view of simmering discontent among the people against the killings of the RSS leader and his PSO by the militants.
Police and security forces continued searches at different places to track down the militants involved in the killings but they remained untraced. Police have, however, detained about dozen suspects including two surrendered militants for questioning in connection with the killings but no formal arrests have been made so far.
As reported, police have shown photographs of seven listed militants of Kishtwar to number of eyewitnesses but none of them resembled to the attackers, indicating that the militants, who executed the killings, either belonged to South Kashmir or were fresh recruits from Kishtwar.
Meanwhile, authorities today lifted curfew from Bhaderwah town and restrictions under Section 144 from rests of the areas in Doda district as situation remained peaceful in all the areas.
SSP Doda Shabir Malik told the Excelsior that curfew was initially relaxed in Bhaderwah town from 1030 am to 12.30 pm. However, in view of complete normal conditions, curfew was lifted. Simultaneously, Section 144 was also lifted from entire Doda district.
Sources said police was working on various leads to reach to the militants involved in the killings. At the same time, police, Army and CRPF were also conducting joint search operations in several areas of Kishtwar district to trace the militants.
“Eyewitnesses have been voluntarily helping us to give clues about the militants, who executed the killing inside the District Hospital Kishtwar,” police said.
It may be mentioned here that a militant had struck inside the District Hospital Kishtwar on Tuesday afternoon and opened firing injuring RSS top leader Chanderkant Sharma and martyring his PSO, Rajinder Kumar. Sharma had attained martyrdom in the Government Medical College (GMC) Jammu, where he was airlifted.