JAMMU, Mar 25: The Chief Secretary BVR Subrahmanyam today convened a high level meeting to review the preparedness and measures put in place in the wake of nationwide lockdown for containment of COVID-19 Epidemic as announced by the Prime Minister on 24th March.
Financial Commissioner, Finance Department, Financial Commissioner, Health and Medical Education Department, Director General of Police, Principal Secretary,  Home Department, Principal Secretary, Information Department, Administrative Secretary, Industries and Commerce Department, Administrative Secretary, PHE, Irrigation and Flood Control Department, Administrative Secretary, Power Development, Administrative Secretary, FCS&CA, Disaster Management, Relief, Rehabilitation and Reconstruction, Administrative Secretary, General Administration Department, Mission Director, NHM, Director Information beside senior officers of RTC and concerned departments participated in the meeting.
Divisional Commissioners, Jammu & Kashmir, all Deputy Commissioners and District Police Heads attended the meeting through video conference.
During the meeting, Financial Commissioner Health and Medical Education gave a brief detail of measures already put in place by the Health Department for control, prevention and management of COVID-19 in Jammu and Kashmir.
It was informed that the two confirmed cases of Coronavirus have been now tested negative after following due protocol in Jammu. He also informed that keeping in view the rise in number of confirmed cases in the country, various quarantine facilities have been established in the entire Union Territory of J&K.
After reviewing the preparedness of the health and other allied departments, it was decided that Panchayats, local bodies, lambardars and chowkidars will be involved to trace/report the people having foreign travel history. The Chief Secretary directed for immediate tracing of such persons and putting them in mandatory 14 days quarantine period to avoid community transmission.
In order to ensure smooth movement of trucks on National Highway carrying essential commodities, two check points will be established each in Jammu and Kashmir division. In Jammu Division, the check points will be established at Lakhanpur and Jammu and in Kashmir Division at Qazigund and Srinagar. Passes will be issued by designated authority to these trucks at identified points. To restrict the unnecessary movement of people, the meeting also decided that all inter district movement of people/vehicles will remain suspended during the period expect transportation for essential goods and RTC buses having valid passes issued by the authorities.
Further, it was decided all Government offices, except District Administration, Police, Home Guards, Civil Defence, Fire and Emergency Services, Disaster Management, Electricity, Water, Sanitation, Treasury and other essential services, will remain closed till 14th April. It was informed that Treasuries will remain functional to ensure smooth closing of the financial year on 31st March.
To avoid inconvenience to the public at large, the DCs were asked to encourage and facilitate home delivery of ration, groceries, fruit, vegetables, dairies and animal products to minimize the movement of individuals outside their homes.
During the meeting, the DGP also briefed about the preparations, measures being taken by various wings and units of police force with regard to control the spread of COVID-19 pandemic. He informed that in all District Police Lines, isolation facilities are being created besides suitable places have been identified for providing quarantine facilities to the police personnel. He apprised that adequate funds have been made available to all the units for making different purchases and more funds will be allocated for the purpose.
The Chief Secretary directed that all Police Stations, Offices, Barracks must be sanitized, and fumigated. He also said all the precautions must be taken and there should not be any loop holes or gaps left in our fight against this pandemic.
Highlighting the need for maintaining social distancing, the Chief Secretary also directed all HoDs to ensure attendance of only minimal staff to carry all important works assigned to them. To facilitate the movement of staff of essential services and to those having medical exigency, the Chief Secretary directed DCs to issue movement passes to such people only after proper verification.
Deputy Commissioners were directed to judiciously utilize funds provided to them under SDRF immediately. 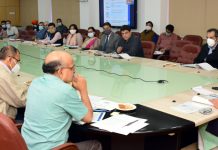 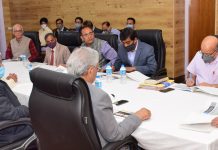 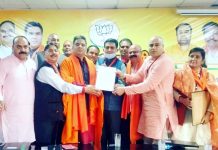 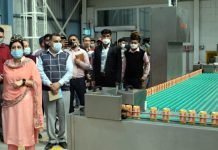 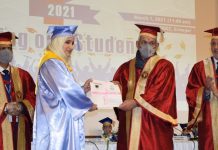 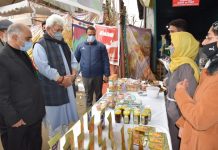 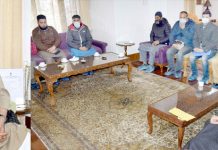 SMC Mayor, others call on LG 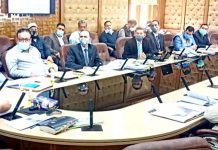 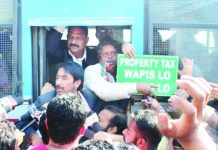 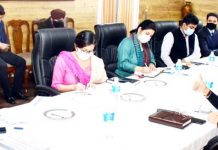 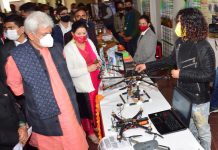 Success stories of progressive farmers from across country can be replicated in J&K: LG 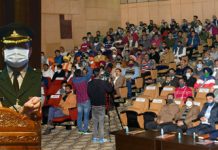 Agriculture sector to get more share of budget component in future: Lt Governor