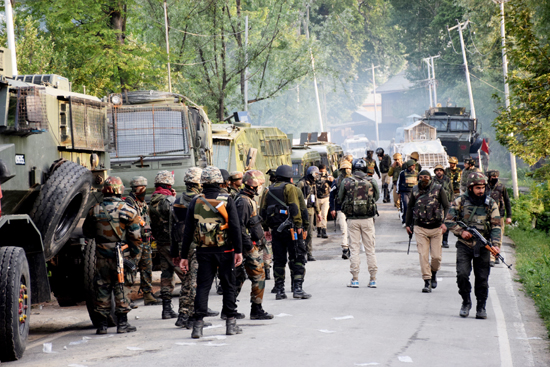 Fayaz Bukhari
Srinagar, May 12: A Central Reserve Police Force (CRPF) personnel was killed in an encounter this morning while three militants managed to escape under the cover of darkness at Bargam village of South Kashmir’s Pulwama district.
A joint operation was launched by 55 Rashtriya Rifles (RR),  Special Operations Group (SOG) of Jammu and Kashmir Police and CRPF at village  Chinar Bagh, Mohalla Takya, Bargam in district Pulwama at around 12:30 am.
Militants fired upon the troops leading to a brief gun battle in which a paramilitary CRPF personal Mandeep Kumar of 182-Battalion was critically injured. He was evacuated to Army’s 92-Base Hospital but succumbed on way to the hospital.

Two houses were also damaged in the gunfight and owner of one of the houses Bashir Ahmad suffered injuries in his shoulder and as per officials the injury is of minor nature and was hospitalized.
Militants managed to escape while taking advantage of darkness amid stone pelting in the area. The militants fled at around 3:00 am taking cover of the darkness.
A senior Police officer said that there was the possibility of collateral damage as such they had to call off the operation. “The militants took advantage of the darkness and fled”, he added.
In the meantime, one more youth from South Kashmir’s Pulwama district announced on social media his joining Jaish-e-Mohammad outfit. Muzamil Dar son of Ghulam Nabi Dar, hailing from Rahmoo village has reportedly joined militancy. His picture with AK-47 has gone viral on social media. His code name as per the picture is Abu Jundel.
His family had already filed a missing report on May 7 at Police Station Rajpora in Pulwama district. On Friday, two youthZubair Ahmad Bhat of Chursoo, Awantipora and Ashiq Hussain Ganaie of Panjran, Pulwama had announced their joining a militant outfit.
And Police today recovered an unidentified body of a man from Nallah Sindh near Manigam area of central Kashmir’s Ganderbal district.
Locals informed the Police about the body which was found inside in Nallah Sindh near Manigam in district Ganderbal.
He said a police team immediately rushed to the area and recovered the semi-decomposed body. “Efforts are on to ascertain the identity of the deceased,” he said.
Police have registered a case under section 174 CrPc and started further investigations in this regard.