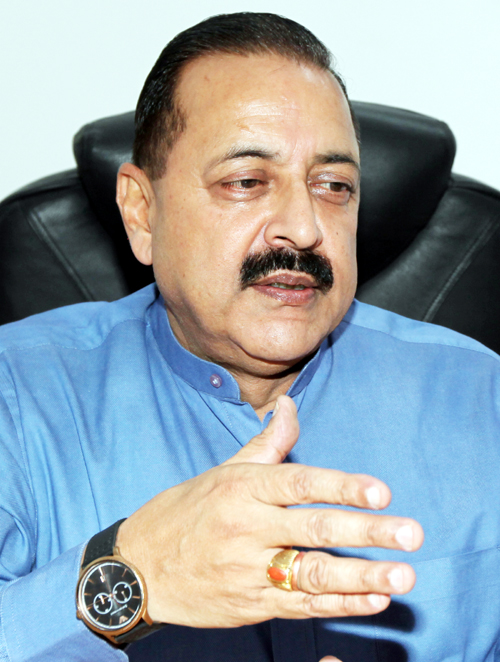 JAMMU, May 12: Outrightly rejecting the unilateral ceasefire proposal of People’s Democratic Party (PDP), Union Minister in PMO with independent charge of North Eastern States, Dr Jitendra Singh today said that those advocating for ceasefire during the fasting month of Ramzan must first ask terrorists who have picked up guns to practice the teachings of holy Quran in real sense which totally forbids violence and harming of fellow human beings during the sacred month.
Talking to reporters here, on the sidelines of an official function to review the CRF and PMGSY road projects for the Jammu region, the Union Minister asked “why not to ask terrorists who have picked up guns to shun violence during the holy month of Ramzan? The ceasefire can’t be unilateral but it is bilateral process and those who are advocating it must first ask the terrorists to declare ceasefire in the fasting month of Ramzan  to follow the teachings of Quran in real sense instead of politicking over Ramzan to please their constituency”.
He said the ceasefire should be seen as a point of strength and not as weakness. “It should be seen that the other side is demanding mercy on the name of ceasefire”, he added.
Dr Jitendra Singh said that Centre has not received any proposal regarding the unilateral ceasefire so far and the Union Home Minister, Rajnath Singh has also made it clear that no formal proposal has been received in this regard till date”.
“Moreover it is the prerogative of Central Government and not the State whether to accept the proposal or not”, he added.
The ceasefire is the personnel opinion of Chief Minister, Mehbooba Mufti and Centre is fully capable to take a decision on it, he said.
On the demand from certain quarters including Chief Minister, Mehbooba Mufti and NC patriarch, Dr Farooq Abdullah regarding holding of talks with Pakistan, Dr Jitendra Singh made it clear that it is the prerogative of Central Government whether to hold talks with Pakistan or not.
“The Narendra Modi Government is the only dispensation which is pursuing the policy of consistency and commitment so far dealing with Pakistan and fighting terrorism is concerned and there can’t be any deviation in this policy”, he added.
“Every day it is being said hold talks with Pakistan. But we have not done it so far”, he said, adding “whatever is being said it will not change Centre’s point of view”.
On the role of social media which is involved in instigating people on violence in Kashmir, Dr Jitendra Singh said that studios have been set up in Pakistan to promote and propagate propaganda and manage content on social media to mislead the people of Kashmir but the Centre is taking effective steps to counter them.
The Union Minister said a perception is being created in these studios on daily basis and false messages are being spread.
He said the intelligence agencies have intercepted recorded false messages like “encounter between militants and security forces has started and people are requested to reach the spot to help militants escape,” .
“It is a reality that studios were set up in Pakistan under a well-planned strategy to manage propaganda on social media to mislead the people of Kashmir,” he added.
Replying to a question on the challenges posed by social media, especially in Kashmir, Dr Jitendra Singh said the Union Home Ministry has taken a serious note of the matter and is chalking out a strategy to counter the spread of false information.
Now this false propaganda is also being countered from this side also, he added.
On the Karnataka Assembly elections, he expressed confidence that the BJP would form the next Government in the State. The Union Minister said the people of Karnataka have made up their mind to vote the BJP to power in the State this time and tread on the path of development and progress like other States of the country.
“Rahul Gandhi has exposed himself by stating he is ready to become the Prime Minister of the country and thus spoke of the dynasty rule,” he said, referring to the Congress president’s assertion on Wednesday that he is ready to occupy the post if his party emerges as the “biggest” party in the 2019 Lok Sabha polls.
Dr Jitendra Singh said the youth constitute India’s 70 per cent population and they have “tasted the real democracy” under Prime Minister Narendra Modi’s rule.
“I have full faith that the people of Karnataka will express their faith in the leadership of Modi and help him to take India to new heights by becoming part of the New India,” he said.
Later Dr Jitendra Singh chaired a meeting of R&B and PMGSY officers and engineers to review the various projects in Jammu region being constructed under CRF and PMGSY schemes.
During the meeting, various constraints and bottlenecks causing delay in completion of the projects were discussed and the Union Minister made various suggestions for overcoming such problems and timely completion of the projects.
The Chief Engineers of PMGSY and PWD were present in the meeting and they briefed Union Minister about various road projects under CRF and PMGSY being undertaken in the State.
Dr Jitendra Singh while reviewing the progress on Kerian Gandyal bridge on river Ravi in Kathua district urged the officers to expedite the work on the same and ensure its completion before September this year.
The Minister was informed that Rs 1047 crore were earmarked for Centre Road Fund (CRF) for the State out of which  510 crore were earmarked for 33 schemes of Jammu region.
The CE PMGSY informed the Minister that total Rs 3800 crore schemes were sanctioned under PMGSY for the State out of which Rs 2100 crore were allotted to Jammu and the Kathua -Doda Lok Sabha Constituency has been allotted Rs 1700 crore in that.
The Union Minister was informed that last year Rs 2400 crore were allotted under PMGSY.