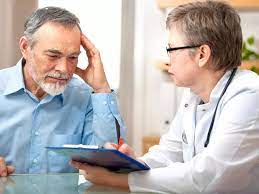 LONDON, Aug 18: COVID-19 patients have an increased risk of developing some neurological and psychiatric conditions, including psychosis, dementia, ‘brain fog’ and seizures, for two years after the infection compared to other respiratory diseases, suggests a study of over 1.25 million people published in The Lancet Psychiatry journal.
The researchers from the University of Oxford, UK, noted that there is also an increased risk of anxiety and depression in adults, but this subsides within two months of COVID-19 infection and, over two years, is no more likely than after other respiratory infections.
Children were more likely to be diagnosed with some conditions, including seizures and psychotic disorders, but the likelihood of most diagnoses after COVID-19 was lower than in adults, they said.
According to the team, the Delta variant was associated with more disorders than the Alpha variant while Omicron was linked with similar neurological and psychiatric risks as Delta.
“In addition to confirming previous findings that COVID-19 can increase the risk for some neurological and psychiatric conditions in the first six months after infection, this study suggests that some of these increased risks can last for at least two years,” said Professor Paul Harrison, from the University of Oxford.
“The results have important implications for patients and health services as it suggests new cases of neurological conditions linked to COVID-19 infection are likely to occur for a considerable time after the pandemic has subsided,” Harrison, lead author of the study, said.
The study also highlights the need for more research to understand why this happens after COVID-19, and what can be done to prevent or treat these conditions. The study analysed data on 14 neurological and psychiatric diagnoses gathered from electronic health records mostly from the US over a two-year period.
Of those with health records in the US-based TriNetX network, 1,284,437 people had a confirmed SARS-CoV-2 infection on or after January 20, 2020 and were included in the study: 185,748 children, 856,588 adults between 18 and 64 years old, and 242,101 adults over 65.
These individuals were matched to an equal number of patients with another respiratory infection to act as a control group.
Records from COVID-19 patients infected during different pandemic waves were also compared to investigate differences in the impact of the Alpha, Delta, and Omicron variants on the risk of neurological and psychiatric diagnoses.
People who had a first diagnosis of COVID-19 within the period when a particular variant was dominant were compared with a control group of the same number of individuals who had a first diagnosis of COVID-19 in the period just before the emergence of that variant.
The study found that, in adults, the risk of having a depression or anxiety diagnosis initially increased post SARS-CoV-2 infection but returned to the same as with other respiratory infections after a relatively short time.
After the initial increase, the risks for a depression or anxiety diagnosis dropped to below that of the control group, meaning that after two years, there was no difference in the overall incidence of depression and anxiety between the COVID-19 group and the other respiratory infections group.
However, the risk of diagnosis of some other neurological and mental health conditions was still higher after COVID-19 than for other respiratory infections at the end of the two-year follow-up.
Adults aged 18-64 who had COVID-19 up to two years previously had a higher risk of cognitive deficit, or ‘brain fog’, and muscle disease, compared to those who had other respiratory infections up to two years previously.
In adults aged 65 and over who had COVID-19 up to two years previously, there was a higher occurrence of ‘brain fog’, dementia and psychotic disorder compared to those who previously had a different respiratory infection.
The likelihood of most neurological and psychiatric diagnoses after COVID-19 was lower in children than in adults, and they were not at greater risk of anxiety or depression than children who had other respiratory infections.
However, like adults, children were more likely to be diagnosed with some conditions, including seizures and psychotic disorders over the two years following COVID-19.
Little change was observed in the risks of neurological and psychiatric diagnoses six months post COVID-19 just before and just after the emergence of the Alpha variant.
However, the emergence of the Delta variant was associated with significantly higher six-month risks of anxiety, cognitive deficit, epilepsy or seizures, and ischaemic strokes but a lower risk of dementia when compared to those diagnosed with COVID-19 just before the Delta wave.
The risks during the Omicron wave were similar to those when Delta was the dominant variant.
Jonathan Rogers and Professor Glyn Lewis from University College London, UK, said “as we emerge from the acute phase of the pandemic, it is critical to understand whether the ensuing risks for disabilities are transient or persistent”.
“The answer that this research provides — at least over a follow-up period of two years — is that it depends on which neurological or psychiatric outcome you are interested in,” said Glyn, who were not involved in the study. (PTI)