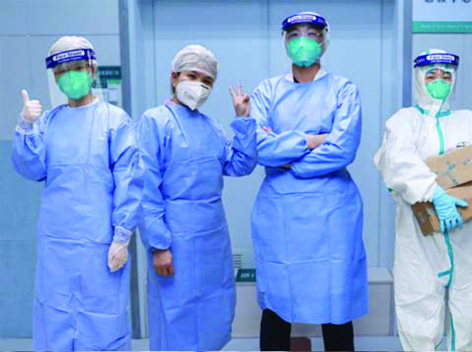 Azad Hussain
In the wake of COVID-19, authorities in Jammu and Kashmir like other parts of world have brought in use all possible resources to retain the spread of this pandemic virus. Besides gearing up Medical Department, the authorities are not lagging behind to provide time to time awareness based on precautionary measures needed to be taken to stay safe from any harm of coronavirus. However amid such kind of situations there is most probability of rumours to spread, which could create chaos among the people in a short span of time . So people need to get aware about it’s evils and how to stay away from them.
Rumours, the statements of questionable accuracy from no known reliable source, has become a routine thing on present date. Now a days, rumours of fake news, lies and misinformation do spread on social media like a wildfire. Though very rarely rumors can create humour, surprise or happiness too, that too ending with disappointments at the end of the day, but in most of the cases rumours become the cause for situations like uncertainty, panic and scare, among the people. Can’t say about it’s frequency in other parts of the world, but as you are witnessing the rumour mongering cases in Jammu and Kashmir, it seems that Jammu and Kashmir would be among the leading regions in this evil. I have heard, Francis Younghusband, a British military personnel and traveller, in his book ‘Kashmir’ in 1908, wrote, about Kashmiris, “they are very careful of the truth that they very seldom use it”.
Soon after the out brake of coronavirus in the world, in Jammu and Kashmir rumours about it “like about the positive cases”, started making rounds on social media in such a way that it added to the panic among people. A few days before when a rumour was propagated by some miscreants in Anantnag that one person in the district was tested positive for coronavirus, soon after it, the District Development Commissioner himself came forward to clear the foggy air, appealing the people to remain away from rumours. In a same kind of case , police on March 17 registered an FIR against a person in north Kashmir for spreading a rumour that two persons were tested positive for COVID-19 in Baramulla.
This reminded me January 17 of 2016, the day when Health Department had done immunisation to the children up to five years of age, against the polo virus and at the evening time of the same day a rumour broke out on social media that immunising vaccine was containing some poisonous chemical, taking the toll of several children. A friend of mine talked to me on phone, and asked, “how many children in your village have died so for, due to poisonous vaccine”, as he had heard the same from some one else , but this was all fake. Soon after the rumour, people were gripped in panic, amid all this people picked up their children and rushed to nearby hospitals, with shrieks and cries filling the air. The hospitals went overcrowded within hours. The huge mobs at hospitals, aggressively started agitation against the medical staff present there and misbehaved with them with out confirming the truth. Later that all turned to be nothing other than a rumour, when the authorities came forward through media claimed no case of casualty, appealed people “don’t give any heed to rumours”.
There are countless instances when the rumours surfaced on social media and immediately concerned authorities needed to come forward before media to give the clearances by providing factual informations to avoid any unfavorable incident to happen which would result due to rumours.
In past, when the access to communication technology was rare, as no one could confirm the reliability of the information the probability of rumour was more. However due to lack of communication resources, the probability for it’s wide spreading possibility was lesser as compared to present date. A person who could listen a baseless statement could pass on the same to a limited people of a limited area, and in the same way the rumour can’t spread to large area within a short time.
But now in modern times, even when reliable sources of news are at easy access, though people can check the authenticity of any news very easily, but still a question arises that why the rumour mongering has become common in present times, the answer for that is misusage of social media. The propagation of baseless information is getting more pace due to more spreading probability through social media.
People are fond of sharing information on social media platforms, which is not a bad thing but the information they share should not be baseless as it could prove destructive within hours.
So social media users have to shoulder responsibility to make judicious use of it and to share only authentic information after properly checking its reliability very well before sharing it.
feedbackexcelsior@gmail.com

The havoc of fake FIRs

When COVID-19 pandemic will end?