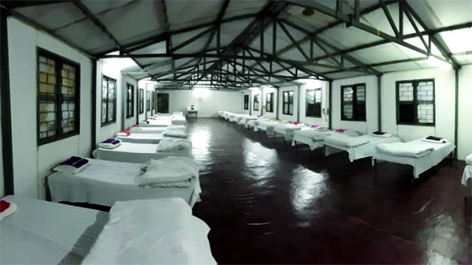 It is not the case of huddling some stranded people at a temporary shelter due to some landslides on a road that arrangements for them could be taken casually . The basic principles of quarantining people is to keep infection from spreading and to check it thoroughly for which minimum but critical provisions of the protocol were necessary to be followed. Agreed, overall administration is currently under unprecedented strain and has to face challenges probably for which it had never readied itself nor expected such a situation to face. While it has to constantly keep on reviewing the arrangements and their levels of maintaining required standards, it must explore the possibilities of preventing concentration of quarantine arrangements at one or two places in cases where such measures were not necessarily unavoidable. It is also not a case of normal circumstances that the people should complain as a routine habit to the extent of not getting homely comforts in quarantine centres and find fault with the taste of food served. While no one can doubt the discomfitures they could and must be facing at certain centres , at the same time, they must give space to patience and forbearance and extend necessary cooperation to the authorities and the personnel manning such places. That some people felt they were not ‘safely’ quarantined in Jammu and Kathua centres where sanitization and hygienic conditions needed to be improved, needed earliest resolution.
At the outset, why should the entry point to the UT of Jammu and Kashmir Lakhanpur be so much ‘overwhelmed ‘ by so many visitors from other neighbouring states and UTs during the lockdown period when they knew they had to remain at the respective places and not move towards their destinations? Either at the entry point itself such persons should have been asked to return and not enter Jammu and Kashmir or sent to such centres where there were adequate sanitation and social distancing facilities . They could have been allowed with certain precautions to proceed to their home towns to report to respective Police stations or district authorities for getting shifted to quarantine centres or getting quarantined at their respective homes. Why instances of such a mess amidst claims of having full control over the situation by the UT Government ? The situation is not that which cannot be managed in Jammu and Kashmir by the concerned authorities looking to the total cases on suspected and confirmed carriers of the virus.
What could be the situation if the number of infected people increased , the administration has to prepare itself to meet with any eventuality. We have reports that long queues and that also in inclement weather conditions for getting entry into quarantine centres were, without maintaining minimum distances from one another making people vulnerable to infections. Why Lakhanpur and Kathua centres should have more people than the system both of the space of such centres and the man power of the administration could cope with? Why not have ‘idling’ Railway coaches at Railway stations turned into temporary quarantine places and even available space at Railway stations utilised for the purpose ? There could be more alternatives and probabilities as also better assured options . It is now fairly known that there being no medicine or any vaccine to cure corona virus except taking steps to prevent its spread for which proper sanitization, no close contacts, proper hygiene and washroom facilities were never ever to be compromised .
The administration should ensure that each and every quarantine centre should be better equipped to deal with the inmates and nothing should be left to chance as one infected person could transmit infection to three in less than an hour and the consequences of a chain formation just sends shivers down the spine. Thank heavens , at the cost of repetition, the situation in Jammu and Kashmir is not alarming in respect of the victims of the virus and it is better and advisable not to make it one, due to faulty management and loose administration.