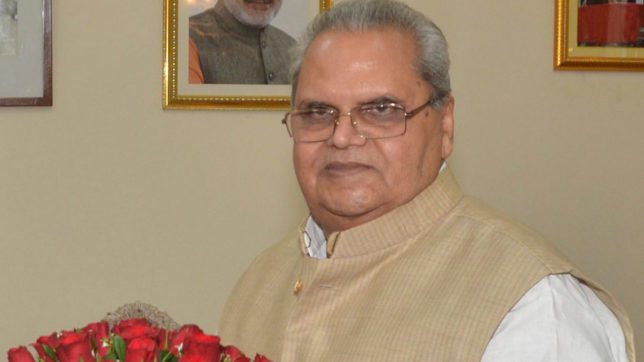 ‘Those who fire upon troops won’t get bouquet in return’

Sanjeev Pargal
JAMMU, Oct 31: Governor Satya Pal Malik today came down heavily on corruption saying those involved in corrupt practices were bringing bad name to the people of the State and, in a stern warning to militants, declared that those who will fire upon security forces, will not get bouquet in return.
Malik today landed in Jammu for the first time during his nearly 70 days tenure in the State as Governor, presided over the State Administrative Council (SAC) meeting at Raj Bhawan here and later flagged off `Saubhagya Rath’, an initiative for electrifying all left out villages of the State.

Click here to watch video
Lashing out at the politicians some of whom had said that the Governor is giving bad name to Kashmir, Malik said it was not he but the “corrupt,” who are defaming the people of the State.
“Those engaged in corruption are the ones defaming the people of the State,” he said, adding: “If any political leader says I am defaming Kashmiris by talking about corruption in Kashmir, it is wrong,”
Malik had recently stated that some of the officers in Jammu and Kashmir have bungalows with 15 rooms and carpets inside worth crores. The charge had invited strong reaction from some political parties saying it has brought bad name to Kashmir.
Malik made the remarks in response to a query over some State political leaders’ statements that the Governor was defaming Kashmiris by talking on news channels about “huge corruption” in the State.
Malik said in his short tenure of over two months, he has not only understood the menace of corruption plaguing Kashmir, but other problems as well.
He said he learnt about the problem of corruption by talking to various stakeholders, including children and youths, and “not through the officers”.
“I will try to resolve the problem with honesty and dedication,” he said.
Talking of the huge financial disparity among the people of the State, the Governor said the situation pains him.
“If corruption stops in Kashmir, the poor will benefit,” he said.
On Jammu and Kashmir Bank recruitments controversy, Malik quipped: “I said whatever I was told by the J&K Bank officials and youth. He added that the J&K Bank was doing a good job and it was a wonderful institution of the State.
“Instructions have also been issued to the Bank authorities on how to run it,” Malik said.
Asserting that the terrorism cannot be wiped out by killing terrorists in Kashmir, Malik said that aim is not to hunt them down but to eradicate terrorism by bringing them back to mainstream.
“Pakistan wants that Jammu and Kashmir should remain disturbed but it didn’t succeed in its designs as they failed to do anything during just concluded Urban Local Bodies elections,” Malik said.
He said the terrorism cannot be wiped out by killing terrorists.
“They will keep joining. They will keep attacking police and security forces and in return, bullets will be fired not flower pots and in that, they will be killed. “, Malik said.
He said: “Our aim is not to hunt them down (the militants) but to eradicate terrorism. “We want to give an impression to the people of the Valley that nothing is going to be achieved from terrorism”.
“When powerful (terror) outfit like LTTE could not do anything, what these terrorists (in Kashmir) will do? We want to bring them back to mainstream so that they leave the gun culture”, he added.
Malik said that attacks on police force were unfortunate but maintained that police is fighting bravely and they will take care of the situation. “Police is capable enough to fight against terror”.
Replying to another question about dealing with radicalization of youth in Kashmir, he said this was very significant issue.
“Those, who are being radicalized, need to be assured that it will not benefit them. By taking up arms in their hands and by getting radicalized, neither they nor we can settle the issue”, he said, adding the issues can be settled only through talks.
Malik said the militants have to be assured and brought towards the path of talks (to resolve the issue).
The Governor said that Pakistan was frustrated due to their internal problems as they are selling their house hold items to run their country. I don’t pay attention towards them, he added.
He said that percentage will increase in upcoming Panchayat polls in J&K. The Urban Local Bodies had witnessed low turnout in some parts of the Valley and heavy turnout in Jammu and Ladakh regions.
“The Urban Local Bodies elections were conducted peacefully and hopefully the percentage will increase in the Panchayat polls,” Malik asserted.
To a question of harassment to young cricketers by Jammu and Kashmir Cricket Association (JKCA), the Governor said that he will talk to those children himself and whosoever has harassed them, the Government will act against him.