E-Paper
Home International Coronavirus may have silently existed in China as early as last October:... 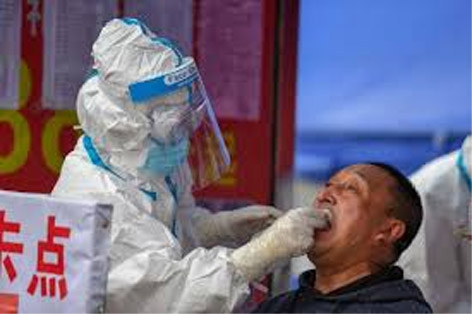 LONDON, May 19: Although the COVID-19 pandemic is known to have originated from Wuhan, China in December 2019, researchers tracking the origin of the virus, say that the novel coronavirus may have existed in a latent phase in the city since last October.
According to the study on the evolution of the virus, published in the journal Frontiers in Medicine, infections may have followed a silent course during this early phase, spreading among the city’s population in a random way without showing epidemic signs.
“An unidentified animal or animal parts contaminated by a virus initially originating from bats was brought into contact with humans in October – November 2019, starting a latent infection,” the scientists wrote in the study.
The researchers, including Jordi Serra-Cobo and Marc Lopez, from the University of Barcelona in Spain have described the combination of biological and social factors which may have led to the outbreak of the novel coronavirus in Wuhan, the first epicentre of the pandemic.
One of the factors, they believe, is the co-occurrence of three major celebrations in China over a short time for which the demand of food and natural products was exceptionally high.
The study noted that the resulting movement and storage of large amounts of food, including living animals, in December 2019 also played an important role in the rise of the pandemic.
A very high attendance of markets in December 2019, accelerated the transmission of the virus, they said, followed by elevated levels of human mobility for the holidays in January 2020.
Intensive international mobility of goods and people in January and February, and a long period of silent incubation of the novel coronavirus likely added to the amplification of the global spread of the disease, the study said.
Generally, the scientists said, three conditions are necessary for an infectious disease to spread — the infectiousness of a pathogen in humans, contact between humans and the pathogen reservoir, and last, its ability to spread through a social circuit.
Referring to COVID-19, they said, all these required conditions coincided in Wuhan in late 2019.
They said a specific coincidence of biological and social factors that enabled the emergence of the novel coronavirus, and the spread of the global pandemic.
“What unchained the epidemic is the simultaneous occurrence of two major celebrations in the same place — the Chinese New Year and the Great Family Feast — where many people who were initially infected were in contact and it provided the necessary amplification phase. Another key step was the mobility,” the researchers said.
They added that the origin of the SARS-CoV-2 outbreak in China is also linked to wild animals like bats and pangolins, however, they said the location of the first human infection will likely remain unknown.
“Contamination through traditional medicine, pets, or any other contact event between humans and the source of the virus, including the handling of viruses in a laboratory, must be considered,” the scientists noted in the study.
They believe the initial contact might also have taken place in farms, since developing rural areas offer favourable environments for the transmission of coronaviruses.
“In this latency phase, the infection remained silent, spreading in a stochastic way within the population, with no epidemic identified yet,” the study noted.
According to the scientists, destruction of natural habitats for human development influences the change in behaviour pattern of the pathogen reservoir species, and increases the chance of them infecting humans.
This phenomenon is highly important in the southeast Asiatic area from where SARS and COVID-19 originated, Serra-Cobo said.
The scientists cautioned that attention should be paid to human activities related to wild animals such as trade, food, and medicine.
They said it is important to ban the use of protected species, with alternatives offered to avoid the impact of the wild animal black market where these are sold illegally.
Although the SARS-CoV-2 outbreak occurred suddenly in Wuhan, the researchers believe that it could have been avoided since some features of the pandemic were consistent with previous coronavirus outbreaks like that of the Middle East Respiratory Syndrome, or MERS.
“Other pandemics will happen. It is just a matter of probability and time. Currently, the risk of emergence is mostly coming from coronaviruses, arboviruses, and influenza viruses,” the scientists warned.
They noted the importance of preparedness and education along with international cooperation to prevent the next pandemic.
“It is vital for the governments to anticipate and prepare to stop the next emerging pandemic in its original place instead of just reacting and causing long-term destruction of our society and economy, which is happening now,” the researchers said. (PTI)