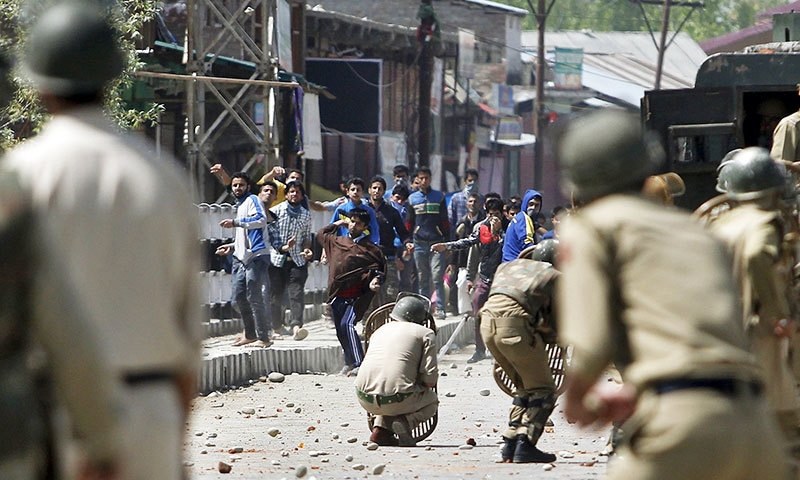 Excelsior Correspondent
SRINAGAR, May 1 : In a major crackdown against the suspected stone pelters ahead of elections in third phase of Anantnag Parliamentary constituency, security forces rounded up around 30 youth from several villages during nocturnal raids in Pulwama district of South Kashmir.
These raids were conducted in Murran, Karimabad, Gudoora, Kangan, Parigam, Rahmoo and Payar villages of Pulwama district last night during which police detained around 30 youth accused of stone pelting.
Security forces have prepared a list of suspected stone pelters from Pulwama and Shopian districts, where polling is being held on Monday (May 6) in the third and final phase of Anantnag Parliamentary constituency.
In the first phase of polling in the constituency, polls were held in Anantnag district on April 19 and this was followed by Kulgam district which voted on April 29. Now two districts of the constituency -Shopian and Pulwama- are voting on May 6.
The elections in the constituency are being held in three phases for security reasons. So far the voting in the first two phases was held without any violence and security forces are not taking any chances for the third and last phase.
Meanwhile, a police constable was critically injured after he was fired upon by militants at Khanyar area of Srinagar district this evening.
Militants barged inside the house of the policeman Mohammad Iliyas at Kaw Mohalla Khanyar and fired upon him. He received bullet wounds in the attack and was shifted to SMHS hospital for treatment.
Iliyas, a Selection Grade Constable, is presently posted in Handwara area of North Kashmir.
Security forces cordoned off the area to nab the assailants. However, they had fled from the area after firing at the cop.
Two boys were injured when a shell they were fiddling with went off in Dhamhal Hanjpora area of South Kashmir’s Kulgam district today.
The boys were fiddling with the explosive device when it went off at Dhamhal Hanjpora, causing minor injuries to both of them. The duo identified as Shahid, 12, and Ikhlaq, 11, were shifted to nearby PHC for treatment.
After being treated at the PHC, Ikhlaq was referred to district hospital Kulgam for advanced treatment.