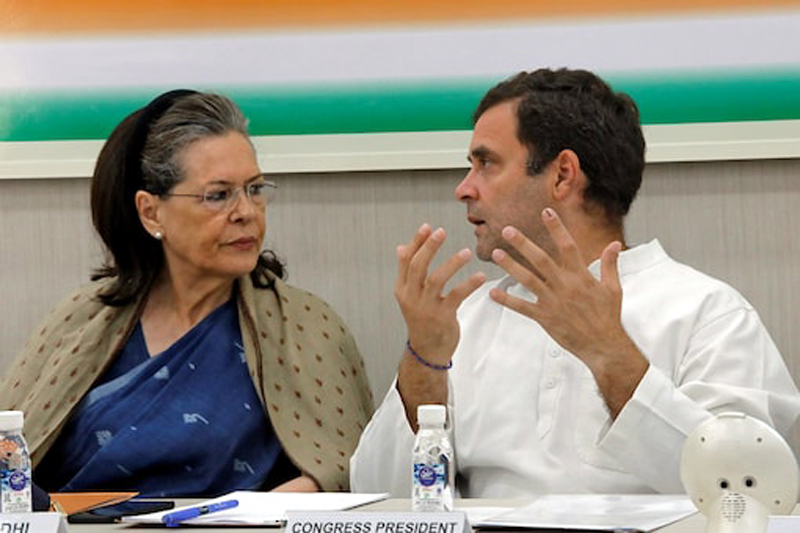 Dr. Satwant Singh Rissam
The year 2014 was very disastrous for the Congress party. Since then, the fortune of Congress has seen a dramatic downfall and a mass exodus of leaders. And every defeat after 2014 the Congress called for an analysis of its decline, which further eroded the Congress from the Indian political system. It was all because such analysis in the name of “Chintan Shivir’s” was just a ‘cosmetic’ step and nothing changed on the ground. This continually heightened the frustration of senior leaders of this party who had a high stake in the Indian political system. The junior/budding leaders were never worried as they felt it was time to work less, save energy and grow more just because of the leadership exodus. This helped many to build a new coterie around Gandhi family and the fight between new v/s old leaders got deeper. So, both ways the Congress party kept losing, internally and externally.
The past eight years haven’t brought anything good for Congress. In May, the grand old Congress called for a three-day long ‘Chintan Shivir’ in Udaipur. This program was organized to analyze defeat in the assembly elections. But during this ‘Chintan Shivir’, former Punjab Congress chief Sunil Jakhar announced his resignation from the party. Before quitting, he said, “no one is bothered about revamping the party from this existential crisis”. Jakhar later joined BJP. And after this ‘Chintan Shivir’ Hardik Patel too joined BJP. Surprisingly, Rahul Gandhi appeared very confident in Udaipur and made remarks that regional parties can’t defeat the BJP. This sent shivers down the spine of many senior leaders. Firstly, because in the eight years regional parties have performed better against BJP. Secondly, it was an open challenge to regional parties many of whom were alliance partners.
With all this, the question remains – can struggling Congress defeat BJP in absence of senior leadership? The infighting among Gandhis and the Congress leaders has brought the party to the edge.In the prevailing conditions, sunny days are very far for the Congress party. Also, it will face an internal storm very shortly after the exit of Ghulam Nabi Azad. The tremors caused by G 23 Congress leaders will be felt across India. Ahead of assembly elections in Himachal Pradesh and Gujarat,things have already slipped away from the hands of the party. Senior leader Anand Sharma resigned from the chairmanship of the party’s steering committee along with two Congress MLAs in Himachal Pradesh. That is not all, former Gujarat minister Naresh Raval and former Rajya Sabha member Raju Parmar too left Congress. And except for Anand Sharma, all of them have joined BJP.
In J&K, Congress lost political ground after the exit of Azad loyalists. Many leaders have resigned, and some more are ready to jump the ship. The seeds of internal unrest here in the local unit were sown in the spring of 2022 when in the much-hyped ‘Chintan Shivir’ no leader from Jammu was invited. Only then president of J&K Ghulam Ahmed Mir and Tariq Hamid Karra attended the three-day event. Ghulam Nabi Azad participated in the event as part of the party’s central leadership. Recently, Vikar Rasool Wani was appointed the new chief of the J&K Congress. But the revolt started against him on the first day. Four senior leaders resigned from their posts following the local Congress revamp. Congress also appointed Raman Bhalla, as the new working president, to gain some brownie points from the Jammu region. But Bhalla himself has lost considerable public following within his Gandhi Nagar seat.
Congress won’t gain anything with this rejig done after 7 years of wait in J&K. Congress is fading in the entire Jammu region with rising of BJP and already in Kashmir regional parties have a stronghold. The faction-ridden Congress will face a tough time when assembly elections are declared in J&K. With the entry of the Aam Admi Party into the Jammu region, things are set to become more difficult forCongress. After the exit of Azad, it will be an uphill task now for Vikar& Bhalla to save the party in J&K’s political scene. The move of Ghulam Nabi Azad is very strategic as the countdown to elect a new Congress chief has also begun. Azad will cause damage to Congress still we cannot dismiss Congress immediately as a national alternative to BJP. Finally, the ball is in the court of the Gandhi family.It is time to do a reality check to revive the party in the entire country. Though summer is ending, and BJP waited for more than 50 years to gain power so Congress can start from zero and they can be back in a decade because democracy is precious and fragile.