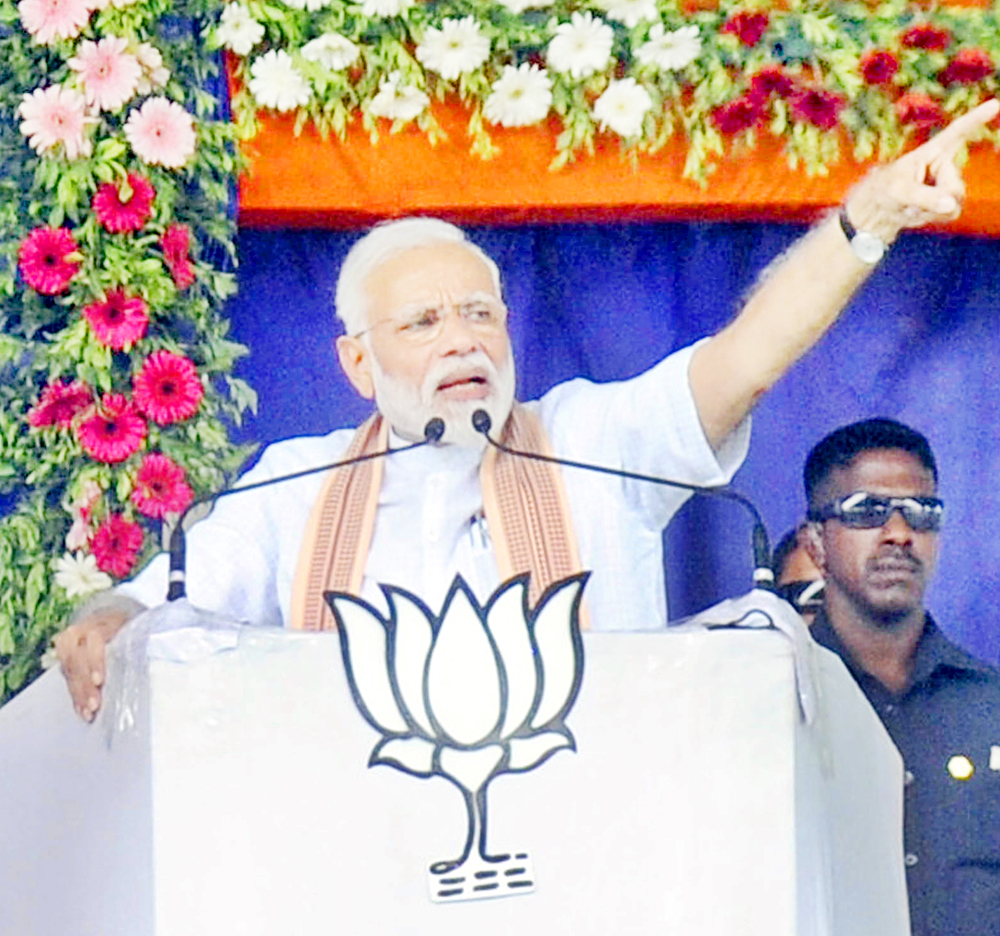 ‘Terrorism now confined to few pockets’
Sanjeev Pargal
JAMMU, Apr 17: Prime Minister Narendra Modi said today that Congress was supporting the forces which subject our armed forces to stone pelting in Kashmir and declared that this Parliamentary election will decide as to who will run the country–those who have dedicated their life to nationalism or those who were justifying sedition.
Modi said Pakistan Prime Minister Imran Khan’s statement that chances of talks with India were better if the BJP was voted to power was an attempt by the cricketer-turned-politician to influence the voters in India.
In a series of tweets after addressing election rallies in various parts of the country today, the Prime Minister said: “On one side, we have given our armed forces a free hand to act against those who spread terror. But on the other hand, Congress ‘Dhakosla-Patr’ (election manifesto) promises to weaken the country’s security apparatus”.
This is not acceptable at all, he added and said the Congress wants to lower the morale of lakhs of armed force personnel, who were fighting terrorism in Jammu and Kashmir.
“For the Congress, Army chief is a ‘goon’, they accused Air Force chief of lying. They questioned armed forces when they carried out surgical strikes and air strikes (in Pakistan). Do they trust our armed force or they believe in what Pakistan says,” he asked.
Modi said this Parliamentary election will decide whether this country will accept the ideology of ‘Tukde Tukde’ gang or nationalist policy of ‘Ek Bharat, Shreshth Bharat’. This election will also decide whether this country will be run by those, who follow nationalist approach or those who were propagating sedition, he asserted.
Declaring that he has changed the country’s policy (towards terrorism) as per wishes and aspirations of the people, Modi said that `New India’ now kills the militants by intruding inside their territory, a reference towards ‘Operation Balakote’ in Pakistan by the Air Force in which number of militants were killed. The operation was executed to avenge the martyrdom of 44 CRPF personnel at Pulwama in South Kashmir on February 14.
“Leaders of the Government which is powerful don’t speak. Fingers of their Army jawans speak,” he said, adding he was committed to develop an India against whom the nations will think 100 times before having a bad eye, the India, which will track down perpetrators of terrorism in any part and punish them and the India with whom most powerful nations of the world would like to work.
The Prime Minister said only that country can talk of peace, which is capable and powerful to do anything. He added that India has shunned the old policy of seeking help from other nations, which has increased possibilities of peace in the country.
“Terrorism now has been confined to only few pockets,” he asserted.
Modi charged the Congress with hatching conspiracy to link Hindus with terror. “Congress has tried to destroy our faith and traditions and hatched conspiracy to link Hindus with terrorism”.
Meanwhile, Prime Minister Narendra Modi has taken a swipe at his Pakistani counterpart Imran Khan over his claim that Indo-Pak peace talks will have a better chance if the BJP wins in Lok Sabha polls, saying it was an attempt by the former cricketer to influence the elections in India with his reverse swing.
In an interview to a national daily, Modi also noted that Imran Khan had used a slogan targeting him during Pakistan elections.
“We should not forget that Imran Khan was a cricketer and his recent statement that Pakistan would have a better chance of talks with India if Modi is voted back to power, was an attempt at reverse swing to influence Indian elections. However, Indians know how to hit a ‘helicopter shot’ on a reverse swinging delivery,” Modi said.
“We should also remember how he used Modi’s name during Pakistan elections. His slogan was: ‘Modi ka jo yaar hai, woh gaddar hai woh gaddar hai’,” the Prime Minister added.
To a question about criticism that the BJP has resorted to “hyper-nationalism” instead of focusing on real issues in its campaign, he asserted that a large part of speeches is dedicated to the issues of development but they never make headlines.
He then asked if decades of terrorism and deaths of soldiers cannot be considered as real issues.
Attacking his rivals like the Congress, Modi said, “Those who did absolutely nothing on the critical issue of national security are now having problems when India’s national security doctrine has seen a strategic shift.”
Hitting back at the opposition’s charge of politicization of armed forces, he said, “Politicization of the Army happened when they created a fake news of revolt by the Army to gain sympathy. It happened when credit for victory in the 1971 war was given to Indira ji.”
Asserting that patriotism is not a “disease”, Modi said as hyper-secularism was invented to strike at the root of India’s culture and ethos, similarly the terminology of hyper-nationalism has been invented to portray ‘deshbhakti’ (patriotism) in poor light.