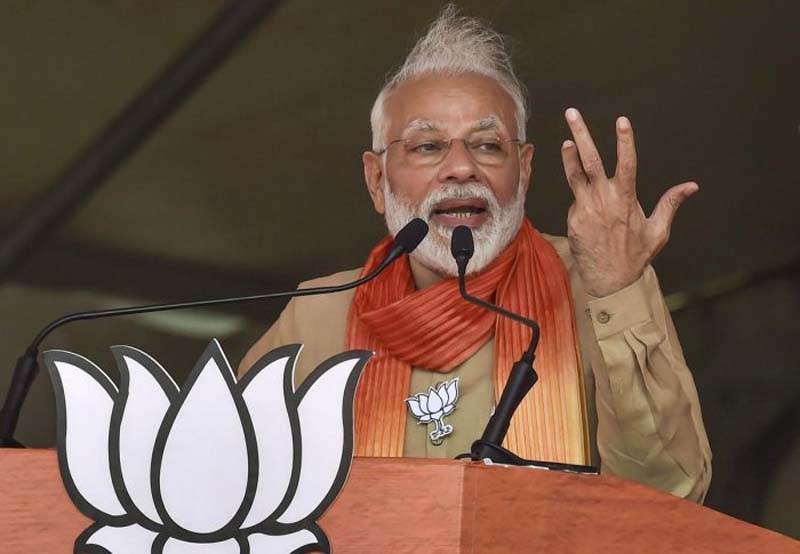 AKOLA/JALNA, Oct 16: Prime Minister Narendra Modi on Wednesday said the Congress sees nationalism in “devotion to a family”, and claimed the opposition party is taking its “last breath”.
He also said that Hindutva ideologue Vinayak Damodar Savarkar’s “sanskar” (values) are the basis for nation-building, and rued that Babasaheb Ambedkar was denied the Bharat Ratna.
“It is due to Savarkar’s sanskar (values) that we put nationalism as the basis for nation-building,” Modi said.
His remarks came a day after BJP’s Maharashtra unit sought Bharat Ratna, India’s highest civilian honour, for Savarkar in its manifesto for the October 21 state polls.
Addressing rallies in Akola and Jalna districts for the next week’s Maharashtra polls, Modi said the Congress now is not the same party that fought for Independence.
“The (Congress) party is taking its last breath. It sees ‘rashtra bhakti’ (nationalism) in ‘parivar bhakti’ (devotion to a family),” he said without taking any names. Modi said he read that the Congress will take a class for the party workers on nationalism. “I don’t know whether to laugh or cry. This proves that today’s Congress is not the one which fought for freedom,” he said. Maharashtra was the land of the brave and had leaders who gave direction to the country, he noted. “Sentiments of nationalism and patriotism are high in Maharashtra. Unfortunately, the Congress and NCP leaders have forgotten these values,” he said.
Hitting out at the opposition parties over objection to abrogation of constitutional provisions that gave special status to Jammu and Kashmir, Modi said, “I want to tell the Congress and NCP leaders, they can place a ‘chadar’ (cloth sheet) at the place where Article 370 has been buried.”
Terming the opposition parties as “shameless”, he slammed them for objecting to the issue of abrogation of Article 370 being raised during campaigning by BJP leaders.
“For political gains, some are openly saying that Article 370 has nothing to do with Maharashtra polls, that Jammu and Kashmir has nothing to do with Maharashtra.
“I want to tell such people that J&K and its people are also sons of Maa Bharti. They have fought cross-border terrorism and embraced death,” he said.
“How dare they question (abrogation of) Article 370 and ask how is it connected to Maharashtra polls?” Modi said, adding that he was amazed that such politically selfish comments were being made in the land of Chhatrapati Shivaji.
In national security, the country has to speak in one voice. But, these people have a habit of indulging in politics on all issues, he charged.
He dubbed the Congress-NCP alliance as a “bhrashtwadi yuti” (corrupt coalition), which took Maharashtra backwards by a decade. The “vote bank politics” adversely affected the state. There used to be bomb blasts in trains, buses, buildings frequently during the Congress-NCP rule, he said.
“At one time, there were regular incidents of terrorism and hatred in Maharashtra. The culprits got away, and settled in different countries. India wants to ask the people who were in power then, how did all of this happen? How did they escape,” he said, slamming the Congress-NCP combine.
Modi claimed that when young leaders in the Congress say the government’s decision of abrogating Article 370 is in the country’s interest, they are sidelined in the party.
Many mass base leaders have quit the Congress and NCP because of the “arrogance” of certain leaders, and those still there, will vote for the BJP-led alliance next week, he said.
While BJP’s priority is national and people’s interest, the Congress and NCP’s intentions and dedication are not genuine, he said.
Modi further said that Marathwada gave three chief ministers to the state, but still the region is backward in terms of development.
“Funds were used only for the (earlier) chief minister and associates and not for the region. Under the BJP rule, rural infrastructure is being strengthened,” he said. (PTI)