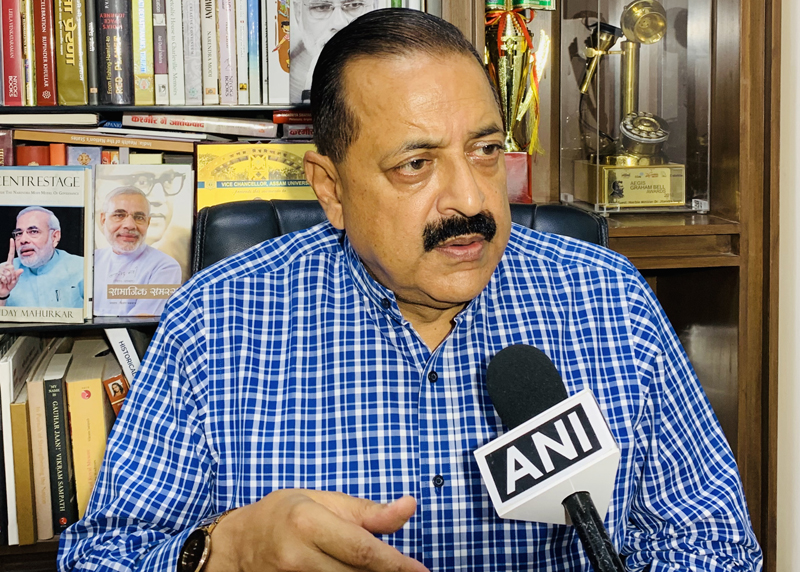 Excelsior Correspondent
NEW DELHI, Aug 11 : Hitting out at Congress party and its Kashmir ally National Conference (NC), Union Minister Dr Jitendra Singh said here today that Congress is resorting to fear-mongering for its survival after Article 370 abrogation.
In a series of media interviews, soon after his return from a three – day tour of North East, Dr Jitendra Singh said here today that the Congress and its Kashmir-centric allies have, over the last several decades, thrived and flourished by creating a fear-psychosis, which enabled them to perpetuate their dynasty rule, generation after generation for three generations, by creating an impression that they are the only political players in the political spectrum of Kashmir and in their absence, there would be nobody to take charge of the political responsibility.
“But, what is more worrying is that even a person like Rahul Gandhi who believes himself to be the Prime Minister-in-waiting has succumbed to the temptation of fear mongering for political survival,” he said.
The matter of fact, however, Dr Jitendra Singh said, is that some of these politicians who project themselves as the sole saviours of Kashmir have, in fact, ended up as wreckers of Kashmir, the outcome of which is what we witnessed today.
Denouncing the fake reports about violence in Kashmir valley, Dr Jitendra Singh said, in today’s time and age of real time reporting when a person sitting at home can also visualize any location through the satellite, it is not only condemnable but ridiculous to even respond to such unsubstantiated reports. He said, the kind of peace and normalcy being witnessed today in Kashmir on the eve of Eid, is much more than what was witnessed on several such occasions before Eid in the bygone years.
Brushing aside the reaction in certain sections about the restrictions like internet suspension etc., in Kashmir, Dr Jitendra Singh recalled that these questions are getting prompted because in subconscious mind, we tend to link these restrictions with abrogation of Article 370. But, let us not forget, he said, that even in the past , when Article 370 was in force and not abrogated, from time to time, restrictions like temporary suspension of internet and mobile were carried out depending upon restrictions by the security agencies.
Reacting to Imran Khan’s comments, Dr Jitendra Singh said, what has been said by Pakistan Prime Minister is not unexpected because anybody in the seat of power in Islamabad has to toe this line for his survival, but what is appalling is that someone like Rahul Gandhi, who is the leader of a principal political party, makes comments which are music to the ear of leaders in Islamabad and serves as a reference for them to make their point.