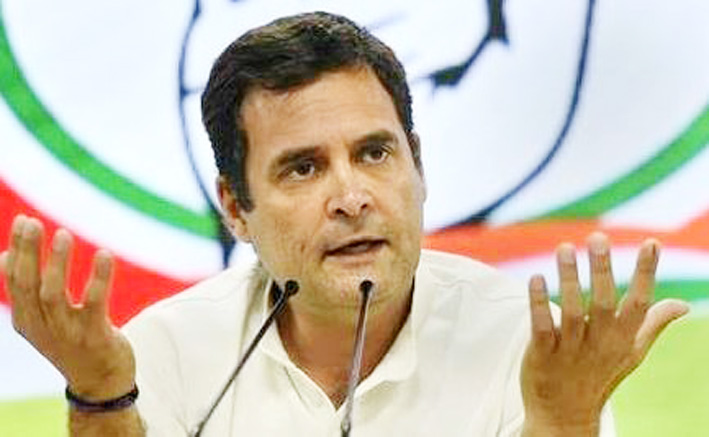 NEW DELHI, Nov 8:
The Congress on Friday launched a multi-pronged attack on the Modi Government over its 2016 move of demonetisation with former party chief Rahul Gandhi terming it a “terror attack” that “devastated” the economy and “took many lives”.
The opposition party also likened the notes ban move to Muhammad Bin Tughlaq rendering currency useless in 1330 and questioned the “silence” of those in power on the third anniversary of demonetisation.
On November 8, 2016, Prime Minister Narendra Modi announced that Rs 500 and Rs 1,000 currency notes would cease to be legal tender.
In a scathing attack on the Government, Rahul Gandhi tweeted, “It’s 3 yrs since the Demonetisation terror attack that devastated the Indian economy, taking many lives, wiping out lakhs of small businesses & leaving millions of Indians unemployed.”
Those behind this “vicious attack” have yet to be brought to justice, the former Congress president said, using the hashtag ‘DeMonetisation Disaster’.
Congress general secretary Priyanka Gandhi Vadra also hit out at the Modi government for claiming that demonetisation was a “slayer of all evils”, saying it proved to be a “disaster” that has all but destroyed the economy.
“Three years since demonetisation and every claim made by the government and those hailing it as a slayer of all evils has been turned on its head. It proved to be a disaster that has all but destroyed our economy,” Priyanka Gandhi said in a tweet.
Using the hashtag ‘DeMonetisation Disaster’, she said “anyone want to claim responsibility?”
Congress’ chief spokesperson Randeep Surjewala also hit out at Prime Minister Modi for the demonetisation move, describing him as “today’s Tughlaq”.
“Sultan Muhammad bin Tughlaq rendered the country’s currency useless in the year 1330. Today’s Tughlaq did the same on November 8, 2016,” he said in a tweet.
“Three years have passed and the country is suffering because- economy collapsed, employment lost. Neither terrorism stopped, nor the business of fake notes,” he said and asked who is responsible.
Surjewala also cited global rating agency Moody’s lowering the outlook on the government of India’s ratings to negative, to claim that demonetisation was a “man-made catastrophe”.
He questioned the “silence” of those in power on the third anniversary of demonetisation.
Taking a dig at the government’s 2016 move, Congress leader Shashi Tharoor said, “The ‘own-goal’ to top all own-goals!” Congress MP Jairam Ramesh also referred to the downgrading of India’s rating by Moody, to take a dig at the government. “Moody’s downgrades Modi’s New India’s investment outlook from stable to negative. That too on the 3rd anniversary of #Notebandi How could it? itni himmat (how dare it)?! It better watch out now!” he tweeted.
The Congress from its official Twitter handle also posted a number of tweets to attack the government over demonetisation.
There has been no decision taken by any government in India’s history that has caused such a devastating impact to the economy as Demonetisation, the party said in a series of tweets.
“Three years after that fateful night the effects of this disastrous policy are still felt amongst various sectors,” the party said.
“One of the apparent benefits of demonetisation was supposed to be the eradication of fake currency; the BJP may be surprised to learn that fake currency doubled within a year of this disaster,” it said in another tweet.
After failing all its other objectives the BJP government proceeded to push ‘digital economy’ as a benefit of demonetisation, but once again this failed miserably, the Congress claimed in a tweet using the hashtag ‘Note bandi Se Mandi Tak (from demonetisation to economic slowdown)’
“Three years after demonetisation the pain and fear still lingers in people’s lives and the devastating effect on the economy reverberates through every sector. Does the BJP govt have the courage to accept their faults?” the Congress said.
The Youth Congress activists on staged a demonstration outside the Reserve Bank of India’s office here, slamming then Modi government for implementing demonetisation. (PTI)