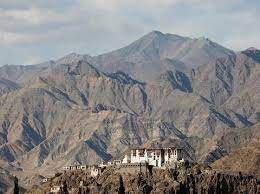 Ostensibly, one of the top purposes of making Ladakh a separate Union Territory is to ensure its fast economic development in which it had remained quite far away as a constituent of the then State of Jammu and Kashmir due to various reasons. In fact, a comparative analysis would reveal that it has really undergone lot of development after being declared as a UT especially in infrastructure, power generation , aviation sector and development of far flung villages which are scattered due to topography or geographical reasons . Ladakh , as we know, being blessed by nature with a unique type of enchanting beauty , valleys, lakes , tourist spots etc being also a sensitively strategic area as having borders with two belligerent neighbours China and Pakistan on northern and eastern sides, needs to be accorded priority in respect of more of developmental projects which can further boost up various areas of economy as much still needs to be done since the cold desert needs more with intent to improve the standard of living of the Ladakhi population.
Since sufficient number of our Army personnel are deployed along the borders , while that plays its own big role in strengthening the local economy , it is incumbent on the Government that there should be facilities and the requisite infrastructure which is to ensure movement and mobility throughout the year and vehicular traffic , both civilian and related to defence, keeps on moving smoothly. Tunnels , therefore, are the answer to the peculiar situation in respect of road mobility in Ladakh sector especially their efficacy and utility during winter months when it snows heavily.
What is , therefore, imperative is that despite geographical and climatic constraints the strategic projects must be fully ensured to be completed in time. However, among various such projects underway is the much hyped and strategically important project of the Zojila Tunnel on which currently work is going on quite smoothly and with good pace. The inalienable part of any developmental project on which work is going on must be subjected to regular review and follow up not only to know the progress of the work but whether any difficulties were encountered and also whether quality and design were given immaculate and pointed attention. Union Minister of State for Home visiting Ladakh in this context recently while reviewing the work on Zojila Tunnel and upon being briefed all about the progress of the work on it , however, asked the executing agency to accelerate the pace of work on the tunnel so that it could be completed in time and made operational.
Zojila Tunnel , once completed shall earn the distinction of being the country’s longest road tunnel and Asia’s longest bi-directional Tunnel . This tunnel, it may be recalled , started in late 2020 otherwise was scheduled to be completed by 2026 but looking to the progress of work on it, it is hoped that it may achieve the ”all set target” by the year 2025 itself or a year ahead of timeframe thanks to the dedication of the engineers, technicians and other skilled and non-skilled personnel engaged in its construction.
This tunnel may be termed as a lifeline for the people of Ladakh and a game changer for the cold desert looking to the fact that during harshest months of winter when Ladakh used virtually to be cut off from rest of the country ,will now be all open and getting going possibly by the end of 2025. The blockade of roads, avalanches, landslides etc which virtually were hampering road movement for six months will be things of the past once this tunnel known also as “modern day marvel” was completed. Noteworthy is the other aspect related to the travel en-route Srinagar- Kargil -Leh Ladakh which this tunnel is promising in the shape of the travel not only becoming comfortable but the tunnel would be reducing the travelling time by over from 3 hours to just 15 minutes. Look at the project from still other angles like enhancing the safety of travellers during travel and bringing about socio-economic and cultural integrations of the connecting regions of the two UTs and reducing considerably the cost of supplying of logistics and supplies of essential commodities through air to Ladakh forward areas.