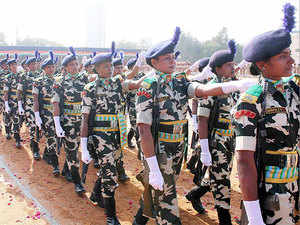 NEW DELHI: The CISF is “augmenting” COVID-19 protective gear and healthcare paraphernalia for its over 40,000 personnel who will begin having close physical interaction with lakhs of passengers once airports and the Delhi Metro re-start operations, a top official said.
The force has “spruced up” measures on anti-coronavirus protection for its troops after 11 of them in Mumbai tested positive for the viral infection that has claimed thousands of lives and infected about 10 lakh people globally.
These personnel are understood to have picked the pandemic infection from a trooper who was on duty of physical frisking and baggage screening at the Mumbai international airport.
“We are augmenting our resources in terms of better masks, gloves and sanitisation facilities. Security desks are being re-done to ensure proper distance between passengers and personnel without security protocols being compromised.
“We will have more robust logistics in place during the next round of operations at airports and Delhi Metro, whenever they begin,” CISF Director General (DG) Rajesh Ranjan said.
The CISF has 63 civil airports of the country under its security cover at present along with the Delhi Metro and they witness lakhs of passenger footfalls every day.
“We are confident that we will have much better equipment to handle the situation (in the coming days) at these two large public transport facilities where our personnel have a close physical interaction with passengers as well as other units,” the force chief said.
The Central Industrial Security Force (CISF) deploys about 32,000 personnel as part of its aviation security group (ASG) to guard airports and about 12,000 troops to protect the Delhi Metro which is the lifeline of national capital region including Noida, Ghaziabad, Gurgaon and Faridabad.
The government has not announced as to when operations at these vital public transport facilities, shut till April 14 due to the ongoing nation-wide lockdown due to coronavirus, will resume.
A force spokesperson added that the ICICI Bank “has donated 16,000 masks and 10,000 gloves for CISF personnel deployed at the Delhi Metro.”
“We are incredibly thankful to the bank for this humane gesture and noble deed. It will certainly help front-line warriors of CISF in the war against COVID-19,” he said.
DG Ranjan said his troops remained steadfast in the line of duty during the first phase of the COVID-19 when the “numbers of passengers were quite overwhelming” due to the incoming and outgoing evacuation and regular flights.
“We created an ideal scenario in terms of social distancing at the airports but the resources were not in surplus and the task was demanding,” the DG said.
The airport units helped in the entry and exit of numerous flights that brought in Indians evacuated from virus affected countries and ensured proper security-cleared departure of special and regular flights as the global airspace started closing, he said.
“At the Delhi airport a special triage area was created at the tarmac to assist incoming passengers,” he said.
“These personnel are still at the airports ensuring that special flights with citizens of other countries fly out safely,” the DG said.
The force, he said, has also created isolation facilities in all its 349 units of deployment across the country.
“We are enhancing beds in these isolation wards so that more personnel can be accommodated in case of requirement,” the DG said.
The about 1.62 lakh personnel strong force has its maximum duties in one-to-one public interaction domain whether it is securing public or private sector enterprises, government ministries and departments and vital nuclear and aerospace installations.
The first positive case in the force was reported on March 28 after a head constable was found infected in Mumbai.
Officials said he has been found negative in three more tests conducted for COVID-19 till now.
“Even the 10 other personnel who were found positive and are in isolation now were asymptomatic when their samples were taken. It was the foresight of our commanders who thought of testing all the personnel who resided in the same campus where the first positive person was living,” the DG said.
This CISF camp in Navi Mumbai has now been vacated and sanitised and all 145 personnel living there have been quarantined by the force at various other facilities. (agencies)