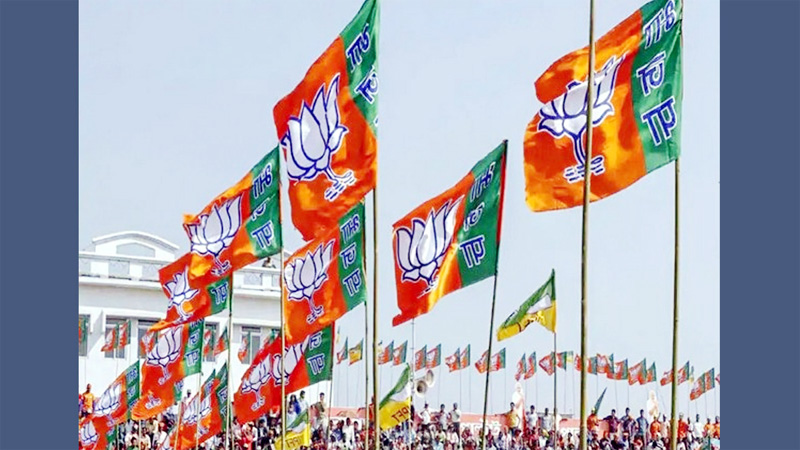 Avtar Bhat
JAMMU, Dec 8: Quick on the heels of national office bearers meeting held at New Delhi few days back, Bharatiya Janata Party (BJP) is holding office bearers and newly elected district presidents, party Prabharis and Seh Prabharis (co incharges) meeting here tomorrow.
According to party sources, the meeting is a procedural follow up to the national office bearers meeting which will also set the agenda for the coming Executive Committee meeting of BJP in the UT, the date for which will also be finalized shortly.
Sources said besides discussing the strategy for the future challenges before the party, the issues related to J&K which were discussed in the national office bearers meeting will come up for the discussion in tomorrow’s meeting. The meeting will also set agenda for the party for next year and issue guidelines to newly elected office bearers to gear up for Assembly and Parliamentary as well as Panchayat and Municipal elections from today by touching every nook and corner of the UT and highlighting the public welfare programmes and policies of Narendra Modi led Central Government.
Sources said as the elections of Panchayats, Municipal Corporations as well as Municipal Committees and Councils are due next year and elections to Lok Sabha are scheduled in 2024, the BJP has decided to start the ground level exercise with the UT office bearers meeting tomorrow. The meeting besides BJP JK UT president Ravinder Raina and general secretary (Org), Ashok Koul, will be addressed by national general secretary incharge J&K, Tarun Chug and party co-incharge, Ashish Sood.
All the party office bearers of both the regions of J&K will attend the meet. Both the national leaders will apprise the office bearers of the party’s strategy, sources added.
They said the party has decided to make preparations for Lok Sabha elections and the meeting will give stress on coordination between office bearers and ground level activists from booth to UT level. Moreover, though no decision has been taken by the Election Commission over the holding of overdue Assembly elections in the UT as yet, but the party wants to gear up for the same.
A senior party functionary said “BJP cadre does not want to be caught unaware if the dates for Assembly poll are announced and hence we will gear up our cadre from today and prepare the ground for the same’’.
Sources said the meeting will also discuss the prevailing political and law and order situations in the UT, the recent targeted killings of minorities, threats issued by militant outfits to package employees and the achievements of Narendra Modi Government especially in the aftermath of annulling the controversial Articles 370 and 35 A.
The meeting will also discuss various pro people decisions taken by Modi Government for J&K as people of the UT had to wait for these decisions up to seven decades, sources said, adding, grant of ST status to Paharis which BJP thinks it’s one of the major achievements, grant of political reservation to Gujjars, nomination of Gujjar Community member form J&K to Rajya Sabha on the basis of ST quota, granting of rights to Gujjars on Forest land and inter-district transfers for employees of the community will also figure.
In addition to it grant of citizenship rights to West Pak refugees and Valmiki Samaj, compensation to PoJK refugees, reorganization of Assembly segments, Modi Government’s move to grant quota to OBCs and nomination of migrants in Assembly, besides construction of hydro electric projects, highways, bridges, ring roads, flyovers, six lanning of Katra-Delhi National Highway, four lanning of Akhnoor road, smart city projects and many more projects on which work is going on in full speed are the major achievements of BJP Government and party needs to launch a vigorous campaign in the length and breadth of the UT to apprise the people about the same, sources added.
Sources said the BJP national leaders during their address to meeting will enthuse the newly appointed team of office bearers to work with more vigor and dynamism to strengthen the party in both the regions of the UT.