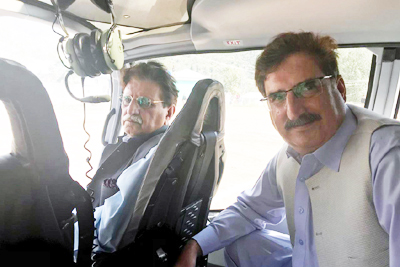 3 forward posts open firing
Excelsior Correspondent
JAMMU, Sept 30: A civilian chopper of Pakistan carrying self-styled Prime Minister of Pakistan occupied Kashmir (PoK) Raja Farooq Haider violated air space and intruded into the Indian territory in forward area of Gulpur along the Line of Control (LoC) in Poonch district this afternoon and was immediately engaged with small arms firing by three forward posts but it managed to return as it was flying high.
Sources told the Excelsior that a white-colour civilian chopper intruded inside the Indian territory on the LoC at around 12.10 pm and kept flying over the Indian airspace for about couple of minutes before returning to PoK side and reportedly landing later at Kahuta.
The civilian chopper was reportedly carrying PoK ‘Prime Minister’ Raja Farooq Haider and was in the Indian airspace for about couple of minutes drawing prompt response from the Indian side as three forward posts opened firing targeting the chopper but, according to sources, it wasn’t hit as it was flying high.
Click here to watch video
“It was a civilian white-colour chopper and was spotted inside the Indian territory at Gulpur close to the Line of Control in Poonch district,” sources said.
Though Pakistan has claimed that the civilian chopper inadvertently forayed into the Indian territory and violated airspace, sources didn’t rule out Pakistan’s mischief behind the airspace violation as on earlier occasions also, Pakistan has resorted to such acts to take photographs of forward locations for sending armed infiltrators but, all the times, Indian Army has thwarted Pakistani plans and forced their choppers to immediately retreat to their territory.
Sources confirmed that the Indian Air Force and Army were fully prepared at the LoC but the civilian chopper of Pakistan immediately retreated to their territory. Incidentally, the shots fired at the chopper didn’t hit as it was flying high.
Reports said the chopper carrying the PoK `Prime Minister’ later landed at Kahuta in PoK.
Reports said Pakistan has admitted that pilot of the chopper was at fault as he deviated from the prescribed route on the LoC, resulting into violation of Indian airspace. However, the Indian side was looking into all angles of airspace violation and didn’t trust the statement of Pakistan.
Meanwhile, an Army personnel was injured in a landmine explosion near the Line of Control in Poonch district today, sources said.
The soldier hit a landmine during patrolling near a forward post in Jhallas sector and got injured in the explosion at around 9.30 am, they said.
He was shifted to Army base hospital in Udhampur for treatment, sources said.
As part of the counter-infiltration strategy, the Army uses landmines to plug the possible infiltration routes to stop terrorists to enter into this side and sometimes the explosive devices get dislocated due to rains causing the accidental blasts, they said.
Meanwhile, the officials said a live mortar shell was found lying in an open field near the International Border in Hiranagar sector of Kathua district. It was defused by the Bomb Disposal squad, they added.
The mortar fired by Pakistan some time back had failed to explode and was noticed by a villager in his field on this side of the fencing, they said.