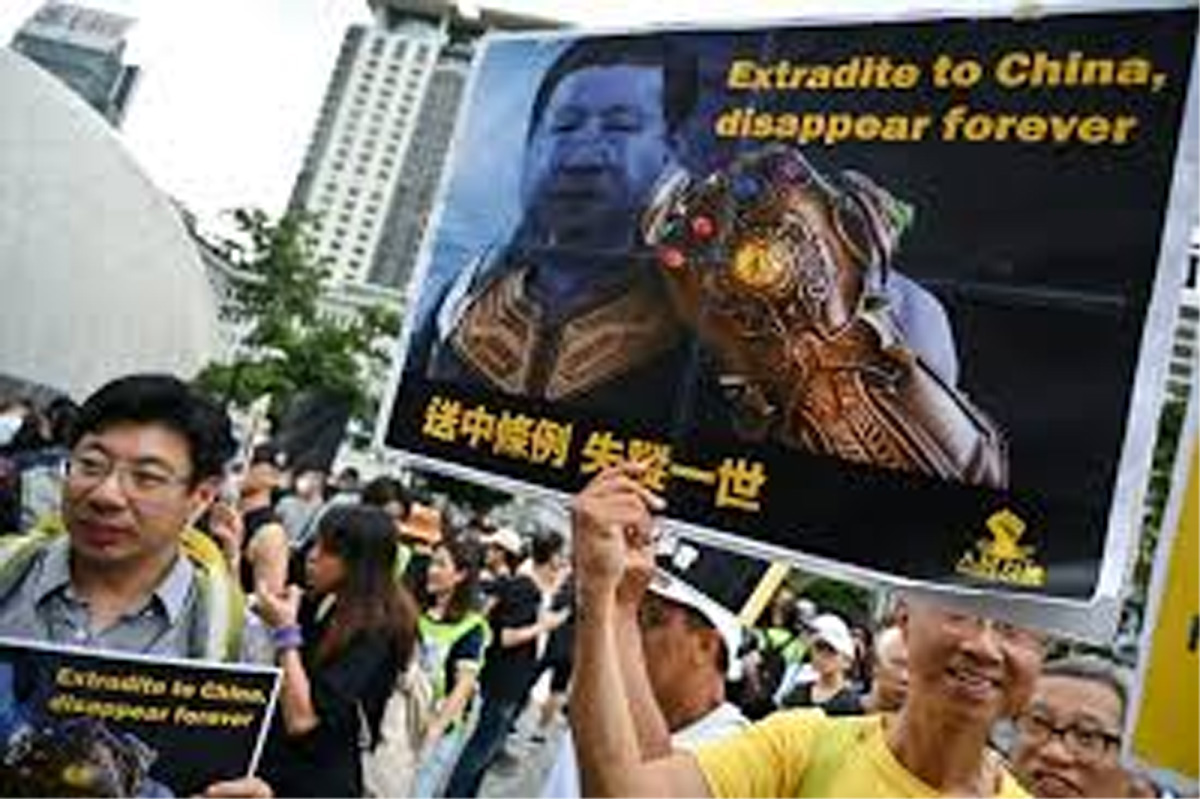 HONG KONG, July 7: Thousands of anti-government protesters began a march in Hong Kong Sunday that will end outside a controversial train station linking the territory to the Chinese mainland, as activists try to keep pressure on the city’s pro-Beijing leaders.

The rally is the first major large-scale protest since last Monday’s unprecedented storming of parliament by largely young, masked protesters — a move which plunged the international financial hub further into crisis.

Hong Kong has been rocked by a month of huge marches as well as a series of separate violent confrontations with police, sparked by a law that would have allowed extraditions to mainland China.

The bill has since been postponed in response to the intense backlash but that has done little to quell public anger, which has evolved into a wider movement calling for democratic reforms and a halt to sliding freedoms in the semi-autonomous city.

Thousands mustered at the rally’s start on Sunday afternoon at a park in Tsim Sha Tsui, a harbourfront district of the city popular with Chinese tourists.

Organisers have billed the march as an opportunity to explain to Chinese mainlanders in the city what the protest movement is about.

Inside the China, where news and information is heavily censored, the Hong Kong protests have been portrayed as a primarily violent, foreign-funded plot to destabilise the motherland, not a mass popular movement over Beijing’s increased shadow over the semi-autonomous hub.

Protesters are demanding the bill be scrapped entirely, an independent inquiry into police use of tear gas and rubber bullets, amnesty for those arrested, and for the city’s unelected leader Carrie Lam to step down.

Beijing has thrown its full support behind Lam, calling on Hong Kong police to pursue anyone involved in the parliament storming and other clashes.

Police had placed the glass and steel structure in virtual lockdown as fears of further clashes soared despite protest organisers vowing to hold a peaceful rally.

Long lines of water-filled security barriers surrounded the station while only those with previously purchased tickets were being allowed in. Ticket sales for Sunday afternoon were halted and only two entrances were open.

The terminus is controversial because Chinese law operates in the parts of the station dealing with immigration and customs, as well as the platforms, even though West Kowloon is miles from the border.

Critics say that move gave away part of the city’s territory to an increasingly assertive Beijing.

Local politician Ventus Lau Wing-hong, one of those organising the rally, said they would “protest in a peaceful, rational and elegant way” adding there was no desire to occupy the station given the catalyst for their movement was opposing people being sent to the mainland.

Police gave permission for the rally to go ahead but urged protesters to remain peaceful, noting there had been calls on social media for people to “take part in non-cooperation movements which involve various illegal acts such as provoking police officers or storming buildings”.

Under Hong Kong’s mini-constitution — the Basic Law — China’s national laws do not apply to the city apart from in limited areas, including defence.

Hong Kong also enjoys rights unseen on the mainland, including freedom of speech, protected by a deal made before the city was handed back to China by Britain in 1997.

But there are growing fears those liberties are being eroded.

Among recent watershed moments critics point to are the disappearance into mainland custody of dissident booksellers, the disqualification of prominent politicians, the de facto expulsion of a foreign journalist and the jailing of democracy protest leaders.

Authorities have also resisted calls for the city’s leader to be directly elected by the people.

A 79-day occupation of key intersections in 2014 calling for universal suffrage failed to win any concessions from Beijing. (AGENCIES)
&&&