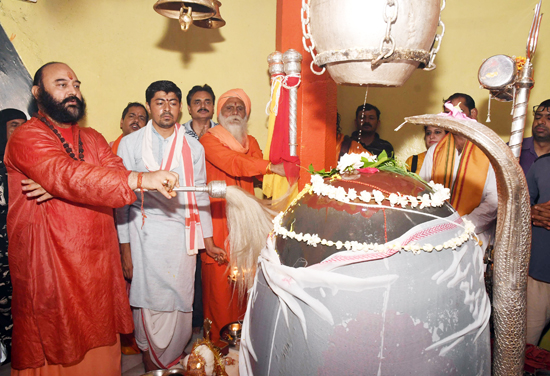 Excelsior Correspondent
JAMMU, Aug 11: ‘Chhari Mubarak’, the saffron-robed holy mace of Lord Shiva, was today taken to historic Shankaracharya temple situated on Shankaracharya hill lock for prayers to maintain the age-old traditions related to the annual Amarnath yatra.
Carried by its sole custodian Mahant Deependra Giri and accompanied by a group of sadhus and devotees, the holy mace was taken out from its abode at Dashnami Akhara in Budshah Chowk area of the Srinagar city and offered special prayers at the temple on the occasion of ‘Haryali-Amavasya’ (Shravan Amavasya).
The sound of conch shell reverberated and charged the whole atmosphere during the two-hour prayers in which a sizable number of sadhus and pilgrims participated, a spokesman of the ‘True Trust’, founded by Mahant Deependra Giri in 2004, said.
He said collective prayers were also offered for peace and prosperity of the Jammu and Kashmir State which is in the grip of turmoil for three decades now.
The spokesman said the Chhari-Mubarak will be taken to ‘Sharika-Bhawani’ Temple at Hari Parbat in downtown Srinagar to pay obeisance to the Goddess tomorrow.
The Chhari-Mubarak would be kept at its abode for ‘darshan’ after rituals for ‘Sthapana’ are performed on August 13. It will be followed by traditional ‘Chhari-Pujan’ on August 15, he said.
“After performing Chhari-Pujan at Dashnami Akhara Srinagar on the occasion of ‘Nag-Panchami’ on August 15, Mahant will carry the holy mace to cave shrine of Swami Amarnath Ji to have ‘Darshan’ on ‘Shravan-Purnima’, falling on August 26, after having night halts at Pahalgam on August 20 & 21, Chandanwari on 22, Sheshnag on 23 and Panchtarni on August 24 & 25 respectively,” the spokesman said.
On August 26, the Chhari Mubarak would be offered day long prayers at the cave shrine on the occasion of ‘Raksha-Bandhan’ and ‘Shravan Purnima’, marking the conclusion of the yatra, which started on June 28.
Meanwhile, on the 45th day of the ongoing yatra of Swami Amarnath Ji, 857 pilgrims paid obeisance to naturally formed Ice Lingam of Lord Shiva in holy cave situated at an altitude of 3880 metres in the deep Himalayas in South Kashmir district of Anantnag.
Till date 2,78,072 pilgrims paid obeisance since the two -month long yatra started on June 28, an officer on yatra duty said.
He said 326 pilgrims left for holy cave via shortest Baltal track early this morning while 126 left by Chopper today.
Besides, 213 pilgrims left for holy cave from Nunwan base camp via Chandanwari track while the pilgrims having night halt at Sheshnag and Panchtarni transit camps also left for their onwards sojourn in the morning, he added.
The officer said that the weather in the cave shrine area was pleasant for the day and yatra proceeded normally.
According to yatra, Nodal Officer Jammu, Arun Manhas, a fresh batch of 68 pilgrims left for twin base camps of Nunwan -Pahalgam in South Kashmir district of Anantnag and Baltal in Central Kashmir district of Ganderbal from Bhagwati Nagar Yatri Niwas here under tight security measures early this morning.
He said 155 pilgrims including 30 Sadhus were registered at Registration counters of Jammu today. Out of them, 125 opted for Baltal and 30 for Pahalgam track. They will leave for their respective base camps early tomorrow morning, he added.