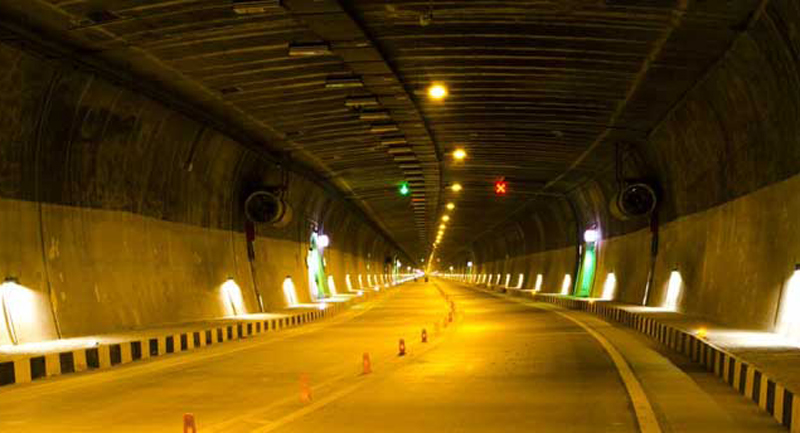 Local vehicles exempted, rates cut for others at Toll Plaza

Sanjeev Pargal
JAMMU, Oct 16: A fortnight ahead of creation of the Union Territory, Narendra Modi Government today paid a fitting tribute to Jan Sangh ideologue Shyama Prasad Mukherjee, who had sacrificed his life for ‘Ek Vidhaan, Ek Pradhan, Ek Nishaan’ (One Constitution, One Head and One Symbol) in Jammu and Kashmir in 1953, by renaming 9.25 kilometers long Chenani-Nashri tunnel on Jammu-Srinagar National Highway, on his name.
An order to this effect was issued today by the Union Minister of Road Transport and National Highway, Nitin Gadkari on the intervention of Union Minister of State in the Prime Minister’s Office (PMO), Dr Jitendra Singh.
“The 9.25 kilometers Chenani-Nashri tunnel which was commissioned on April 2, 2017 by Prime Minister Narendra Modi, has been named as ‘Shyama Prasad Mukherjee Tunnel’ by the Union Ministry for Road Transport and National Highways,’’ official sources told the Excelsior.
Gadkari said that Dr Shyama Prasad Mukherjee’s battle for Kashmir and ‘One Nation, One flag’ has immensely contributed to the national integration.
“Historic! Chenani-Nashri Tunnel on National Highway 44, in Jammu and Kashmir, to be named after Dr Shyama Prasad Mukherjee. This is our humble homage to Dr Mukherjee whose battle for Kashmir, ‘One Nation, One Flag’ has immensely contributed in national integration,’’ Gadkari said.
The Central Government decision came just a fortnight ahead of the formal bifurcation of Jammu and Kashmir State into two Union Territories of J&K and Ladakh, which will come into effect on October 31. The Central Government had on August 5 scrapped special Constitutional provisions of Jammu and Kashmir and bifurcated the State,
“A similar proposal had been mooted by Dr Jitendra Singh when the tunnel was scheduled to be inaugurated by Prime Minister Narendra Modi during Modi 1.0 Government. However, the proposal was objected by then Chief Minister and People’s Democratic Party (PDP) president Mehbooba Mufti on the ground that it would generate controversy,” sources recalled.
With Jammu and Kashmir now directly under the Central Rule, Dr Jitendra Singh took up the proposal with Gadkari citing two significant grounds for naming Chenani-Nashri tunnel on the name of Shyama Prasad Mukherjee soon after the Central Government scrapped special Constitutional provisions of Jammu and Kashmir and bifurcated the State into two Union Territories of J&K and Ladakh.
First, tunnel across Banihal in Kashmir has been named as Jawahar tunnel on the name of Jawahar Lal Nehru and Second, Mukherjee had sacrificed his life in Jammu and Kashmir for the cause of State, which has been fulfilled 66 years after his martyrdom, sources said, adding the reasons went well with Gadkari and he has approved the proposal.
Sources said the naming of Chenani-Nashri tunnel after Shyama Prasad Mukherjee was a significant decision as this was first project of the State to be named after Jan Sangh ideologue.
Meanwhile, Union Minister of State in the Prime Minister’s Office (PMO), Dr Jitendra Singh, who also happens to be the Lok Sabha member from Kathua-Udhampur-Doda constituency, has extended thanks to Prime Minister Narendra Modi and Road Transport Minister Nitin Gadkari for naming Chenani-Nashri tunnel after Dr Shyama Prasad Mukherjee.
“Thanks Respected PM Sh @narendramodi ji. Thanks Respected Sh @nitin-gadkari,’’ Dr Jitendra Singh tweeted.
Dr Jitendra Singh recalled that Shyama Prasad Mukherjee enjoyed special place in Udhampur-Doda Parliamentary constituency, which is represented by him now for second consecutive term, as he was arrested at Lakhanpur and driven during night from Chenani-Nashri area to Srinagar on May 12, 1953, where he was kept in solitary confinement and attained martyrdom on June 23.
Meanwhile, after Dr Jitendra Singh took up the issue of newly constructed Sarore Toll Plaza by the National Highways Authority of India, with Nitin Gadkari and Jammu and Kashmir Governor Satya Pal Malik in view of problems faced by the locals, the State Government has initiated action in the matter.
Dr Jitendra Singh said Chief Secretary BVR Subrahmanyam today directed the Deputy Commissioner Samba to draft new parameters so that all local vehicles are exempted from the Toll Plaza.
Divisional Commissioner Jammu, Sanjeev Verma told the Excelsior tonight that all local private vehicles of Samba district have been exempted from the purview of tax at newly constructed Toll Plaza at Sarore in Samba district.
Verma said all kind of local private vehicles of Samba district will get free token and dedicated lane at the Toll Plaza.
He said the monthly charges of local passenger vehicles will come down from Rs 22,000 per month to Rs 2200 per month. For Samba, Kathua districts and other passenger commercial vehicles, the rates will be down from Rs 27,000 per month to Rs 7500 per month, he added.
“The exemptions of toll for local private vehicles and slashing charge for others was special gesture for this region only as Toll Plazas are being constructed everywhere for better roads,’’ the Divisional Commissioner said.
He added that new lanes were being constructed and traffic jams at Toll Plaza will be over within a week.
Meanwhile, Dr Jitendra Singh said some more relaxations were likely to be worked out for rest of the vehicles.
BJP Jammu-Poonch Lok Sabha member Jugal Kishore Sharma has welcomed exemptions and relaxations at Sarore Toll Plaza and said this will address concerns of locals and transporters.