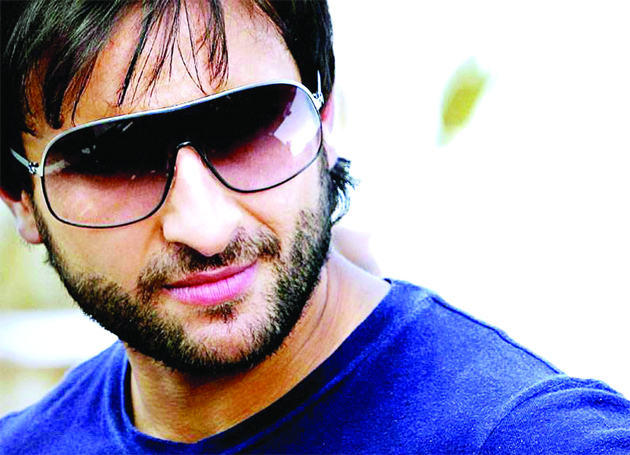 Bollywood actor Saif Ali Khan’s      new film Chef, an adaptation of an American film with the same title, released on last Friday. The actor spoke about the film, his acting career and other issues during the promotional activities. Souvik Ghosh tracks him.
What was the most challenging thing in this film as an actor or a person?
Honestly, there are some roles that are challenging because one has to become somebody which he is not. Likewise, the character in Omkara was challenging for me because I couldn’t have improvised one word and had to learn a language.I do not think Chef was challenging to me. It was challenging to be disciplined in the kitchen and learn how to chop and not cut fingers off. But the basic language that the character speaks is a very urban space that I am familiar with it so a kind of I played myself in that space so actually didn’t find it particularly much challenging, apart from the basic works of learning lines and turning up.
How much did you learn to cook food in the film?
Yes, quite a lot. I had to go through a preparation for a month. Raja (Raja Krishna Menon, director of Chef) wanted me to be comfortable in the kitchen with all aspects. The main thing I learnt was the chopping and cooking spaghetti and pasta. I really enjoyed cooking and now I cook at home. It was very therapeutic and relaxing thing to do. So I am looking forward to cooking even more.
You had the release of Rangoon and now Chef in 2017. Which one is closer to you?
It is hard to say. Rangoon was very dramatic film when I read the script. Chef’s character is obviously similar to what I am. I think its like my show really in that sense. They (filmmakers) are counting on me to perform whereas in Rangoon I played a part for Vishal (director Vishal Bhardwaj) and I really enjoyed it and had a great fun….I always thought Rangoon and Chef are the kinds of new beginning of an era in movies also.
As an actor, you have been calling yourself a ‘late bloomer’ these days. Tell more about it.
I think in every department. I am just an actor. Generally some people have been quite sorted from very young age like my father (Mansoor Ali Khan Pataudi), for example. I think for me, I understand the things a little slowly but 40 is a magical kind of an age or 40s is the time when everything comes to my head together. I have been thinking about acting more and also the style of film making and performing has changed and it has become much more international. Now directors are asking the actor to go subtle in the film. So when we watch international staff, we can try and learn from them. May be it is not about late bloomer but the right time to think about things like craft.
Are you anxious about daughter Sara who has already started to shoot her first film?
I am very happy for Sara. She has done really well so far and also finished her college and now living her dream and got a lovely job. She is being clear headed, knows with whom to work and loves to read scripts. So, she knows what she is doing. I wish her all the best and support. I am anxious for her because the world is sometimes tough. (IBNS-TWF)