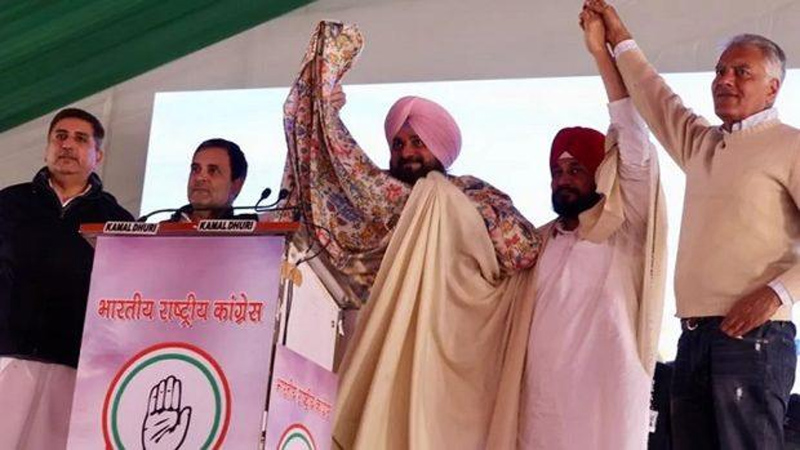 LUDHIANA, Feb 6:
Congress leader Rahul Gandhi today declared Charanjit Singh Channi as his party’s Chief Ministerial face for the high-stakes Punjab Assembly polls, a recognition that was also coveted by State party chief Navjot Singh Sidhu.
Gandhi made this announcement addressing a virtual rally here, after Sidhu in a speech hailed the party’s decision to make Channi as the state CM after the unceremonious exit of the Amarinder Singh last year.
“People of Punjab said we need a Chief Minister who is from a ‘gareeb ghar’ (humble family), who understands poverty and hunger,” Gandhi said.
“It was a tough decision, you made it easy,” said Gandhi declaring Channi as the party’s CM face.
Gandhi warmly hugged Channi, Sidhu and party leader Sunil Jakhar after he made the announcement. Click here to watch video
Before the announcement, both Channi and Sidhu again assured that whoever is chosen by the party as the CM face, they will stand by the decision.
The Congress had taken feedback from party leaders and workers in this regard.
Gandhi said people of Punjab and party workers gave him a tough job.
He said a political leader is not made in 10-15 days.
“Political leaders are not made in the media and TV debates. A person becomes a leader after years of struggle and the Congress has no dearth of such jewels,” said Gandhi at the beginning of his speech.
“Politics is not an event…a political leader has to fight. Many political leaders fight their own battles,” he said, adding that even Prime Minister Narendra Modi fights his own battle.
“There are leaders who stand for issues. Punjab is in the blood of Channi and Sidhu,” he said.
He also recalled having first met Sidhu four decades ago when the former cricketer played a match against Doon School and added he knows him for his perseverance.
Gandhi also praised Jakhar, saying he understands Punjab’s DNA.
Gandhi also lashed out at Prime Minister Narendra Modi, saying he is not the PM but a “king”.
“Have you seen Modiji among people. Have you seen him helping anyone on the roadside,” asked Gandhi as he sought to compare Channi’s humble background.
Along with Modi, Gandhi also hit out at AAP leader Arvind Kejriwal.
“Be it Narendra Modi or Kejriwal. Only one man speaks and when king takes the decision, the matter ends. But Punjab cannot be run like that. Only the Congress can take Punjab forward. We take everyone along, give new vision and show a new path to Punjab,” he said.
“We have not done this once, but many times. And this is the difference between them and us,” he said.
Earlier speaking at the rally, Sidhu said he was never after any post.
“During 17 years of political career, Sidhu never lived for any post but always wanted Punjab’s betterment and improvement in the lives of its people,” said Sidhu.
Hailing Rahul Gandhi’s leadership, he said it was he who made a Dalit the State Chief Minister last year.
“It is a moment of change, inqilab, one which can better the lives of people,” said Sidhu.
Channi while addressing the rally talked about several decisions taken by his Government after Amarinder Singh was made to resign last September.
He said the power tariff was reduced, arrears of electricity were waived and fuel prices slashed.
Channi said 700 farmers laid down their lives during farmers’ agitation against the Centre’s three farm laws.
“Who is responsible for this? It is the BJP Government and the SAD, which was the one that cleared farm ordinances and as well as the AAP government which notified (one) farm law. Now, they seek votes here,” said Channi.
Channi then directed most of his attack on the Aam Aadmi Party, saying they cannot bring any change in Punjab.
He accused the party of spending Rs 500 crore on advertisements in Punjab and called AAP’s CM face Bhagwant Mann is a “proxy”.
“There is a big difference between running a stage and the state,” said Channi as he took a swipe at the comedian-turned-politician Mann.
Channi later in a tweet thanked the party high command for reposing faith in him.
“I sincerely thank the Congress High Command and people of Punjab for bestowing their trust in me. As you have seen us work so hard in the past 111 days to take Punjab forward, I assure you to take Punjab and Punjabis on the path of progress with new zeal and dedication,” said Channi.
Earlier, Jakhar drove the SUV from a hotel to the rally venue, with Gandhi, Sidhu and Channi also seated in the vehicle.
There was a feeling in the Congress that Channi could bring electoral gains to the party especially in areas where there is a sizeable number of Scheduled Castes population, sources said. (PTI)