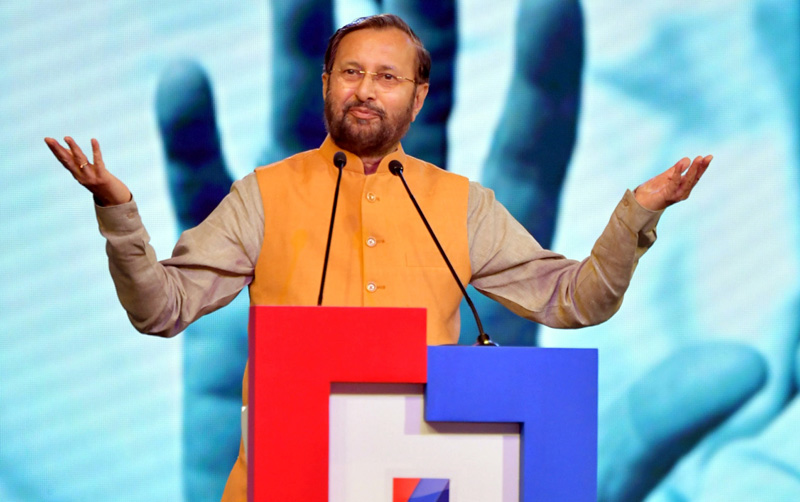 KOCHI, Aug 30:
Union Information and Broadcasting Minister Prakash Javadekar on Friday said the BJP-led Government at the Centre was committed to ensuring media freedom and recalled party leaders’ fight against Emergency in 1975 to protect press freedom.
Noting that there are more than one lakh publications, over 700 TV channels, many web and news portals in the country, the minister said because of social media platforms, nobody can be stopped from communicating with another.
That is the power of communication, he said.
“During students movement days, we fought against Emergency in 1975 and went to jail to protect media freedom.
“That commitment remains today and forever to protect the freedom of media,” the Minister said at an event — “New India: Government and Media” at the Manorama News Conclave here which was earlier inaugurated by Prime Minister Narendra Modi via video conference from Delhi.
Javadekar further said responsible freedom is the essence of a democratic society and explained that responsible freedom does not mean regulated freedom but being responsible while enjoying freedom.
Asserting that the government was committed to media freedom, freedom of expression and protests, he said, “Freedom is the essence of democracy and we will ensure that a vibrant democracy wants all these freedom. That we will ensure.”
The Union Minister, however, said it must be also understood that in a democratic civil society, freedom has to be responsible.
“Responsible freedom is not regulated freedom; it is self-regulation using our own methods,” he said.
Javadekar said incidents of mob lynching are occurring in the country due to rumours spreading on social media.
This happens due to absence of an authority or self-regulatory mechanism in social media, he said.
The Minister said the essence of the Narendra Modi government’s concept of New India is “corruption-free New India, terror-free New India, casteism-free New India, communalism-free New India, poverty-free New India and dirt-free New India.”
“We are fighting a battle against cross-border terrorism. New India has to be terror-free India,” he said.
Javadekar said earlier, many people did not cast their vote, but voted for their caste.
“Now we are seeing a change, people are exercising their voting right beyond the expression of their caste and that is the best thing to happen for a casteism-free New India,” he said.
Replying to questions, the minister said the government welcomes all kind of criticism as they give insights into governance.
“We believe in free institutions because they are the strength of democracy,” the Union minister added. (PTI)