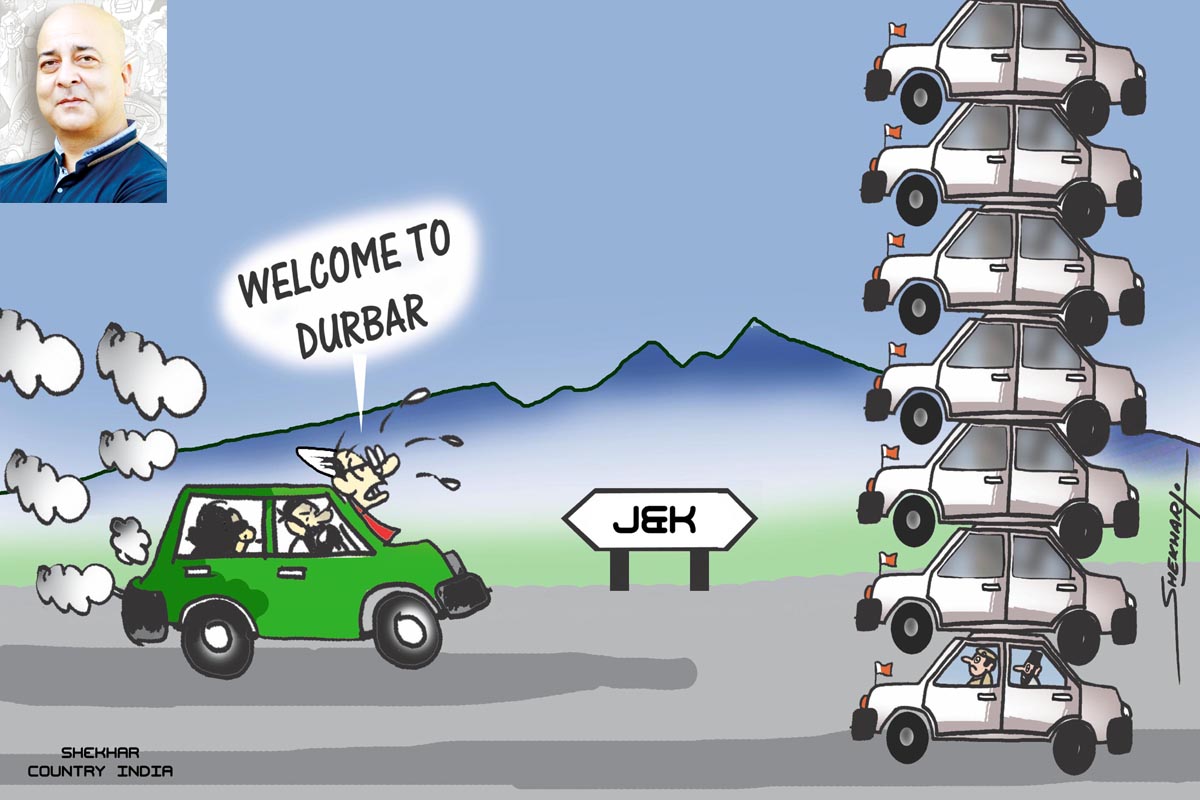 For ‘Chander Shekhar’ Cartooning is an elegant way to describe the world, cartooning is an art to give a smile on the face of common masses who have seen ‘Humour with a Pinch of Salt’.
A cartoonist, who has been inspired by the well recognised cartoonist of India R. K. Lakshman started his journey collecting cuttings of newspapers , stealing the newspaper of neighbours and today, he has earned a big name as a cartoonist not only in Jammu and Kashmir but in India. The elegant way to describe the world is cartooning. It is an art to give a smile on the face of common masses who have seen ‘Humour with a Pinch of Salt’. A cartoon can be simple or complex, and can be drawn in almost any style; but it’s not an exact duplication of reality. It’s a representation of the artist’s perceptions of the world, and every person sees the same thing differently.
Son of the soil, noted Cartoonist Chander Shekhar who has already created a niche for himself in the arena of cartoons and caricatures has proved his mettle many times and has been recognised by cartoonist fraternity of India. Known by the name of Bunty Cartoonist, his eloquent caricature of novelist and critic Khushwant Singh won him the award of ‘Best Caricature’ from amongst 800 entries received from across the nation sketching personalities belonging to various fields and walks of life. Amongst many outstanding pieces of quality creative work , jury decided to honour, Mr. Shekhar an award for his top notch work. He was invited in National and International Cartooning Festival to showcase his cartoons.
Today Jammu must feel proud to have an artist like Chander Shekhar who had created an exhibition ‘Safe Drive Save Life’ for Kargil Diwas but due to present situation in the state it was not exhibited and now it is running in Bangalore and getting accolades from the folks of Bangalore. It is pertinent to mention that the exhibition is having 220 cartoons of 38 countries. In a conversation with Chander Shekhar, he gives us glimpses of the exhibition underway in Bangalore.
Excerpts
Where did the idea of Safe Drive
Safe Life came from?
It is not an idea, it is my inner drive, that provoked me to come out with an exhibition on Safe Drive Safe Life. It is the need of the hour in India to sensitize the masses to drive safe, and it is a normal thing in India that we don’t have ethics on road. Young guns are not taking their life seriously and I feel very bad for them. Being an artist it’s my responsibility to do this kind of work to sensitize the folks of my country through my cartoons.
When did you start cartooning?
It was in 1978, when I started collecting cuttings of newspapers, stealing the newspaper of neighbours to make a scrap book on cartoons as I always liked them the most. The most interesting part of my life was that my neighbours never asked me for my theft. During my college days, I got to know about the prominent cartoonist of India named R.K. Lakshman and started following him. One day I found my scrap book and saw that the cartoons which I have put in my scrap book were of none other than R K Lakshman and from that day I started my journey in the cartooning field from where I started getting fame too.
When did you start curating ‘Safe Drive Safe Life’? Which Cartoon have you submitted to the
exhibition?
It was the month of April when the idea of exhibition came into in my mind but I wanted to make it as an International event so I started asking everyone all over the globe to help me out to make it as a grand success. Now I have an exhibition of 38 countries having 220 cartoons and in Bangalore best of 90 out of it will be projected.
Why exhibition is not running in Jammu?
Did anybody approach you?
Due to the present situation in Jammu and Kashmir, it is not happening in Jammu and Kashmir but after the state gets normal, very soon it will happen in Jammu also. None has approached me but very soon I will get in touch with the Traffic Police and try to get it happen in Jammu as well, as we all know traffic is the main problem in Jammu.
How did you get in touch with Bangalore
for the exhibition?
I feel, Bangalore is the hub of cartoonist and I choose Bengaluru because Indian Institute of Cartoons, Bengaluru approached me to showcase my exhibition on this growing issue in India. Day in and day out they are intimating me regarding the exhibition and telling me that this International exhibition is running successfully in Bangalore.
What do we expect next from you?
I am working on an exhibition on drugs. Since Independence, our country is facing turmoil, which is more dangerous than terrorism in the of Jammu and Kashmir i.e drugs. The spread of drug menace in Jammu has become a nuisance particularly among teenagers in Jammu. Drug menace is difficult to control and is often referred to as a relapsing disease. Many efforts have been made by the government to put a full stop on it but there is no sign of relief. Though it is very tough to come out of it, there are ways to cure the problem which I feel can be cured through different art. As theatre can play a great role but cartooning can also create a big difference.