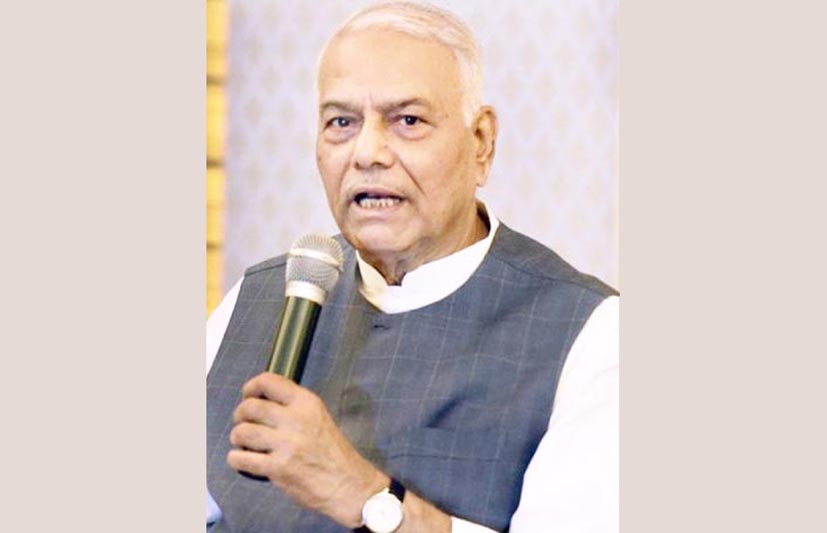 LUCKNOW, Jan 27:
Former Union minister Yashwant Sinha here on Monday termed the passing of anti-CAA resolutions by non-BJP states a constitutional crisis, saying this can’t be ignored.
He stressed that there was no need to bring the legislation as it was “anti-democratic” and “divided people on the basis of religion”.
“There is a constitutional crisis. You cannot ignore state governments. You have to take them into confidence,” Sinha said when asked about resolutions passed by states against the Citizenship Amendment Act.
He expressed apprehensions that the Centre “might impose the president’s rule” if the legislation was not implemented.
“They can do it. They are mad people,” Sinha said while interacting with mediapersons in the presence of Samajwadi Party chief Akhilesh Yadav and actor-politician Shatrughan Sinha.
The former BJP leader was here as his march from Mumbai to Delhi’s Rajghat for the propagation of the ideology of Mahatma Gandhi reached the city. Further commenting on the legislation, Sinha said, “It is anti-democratic and against the basic structure of the Constitution. This type of amendment in the citizenship law was not needed.”
He said an atmosphere of “ashanti, kolahal aur dar” (unrest, uproar and fear) has surfaced in the country due to government initiatives.
“Due to the CAA and the announcement of the NRC, people are afraid and agitating. It’s the responsibility of the government to reach out to those who are in fear and agitating to ally their apprehensions and establish peace but it is not doing any such thing,” he said.
“They are dividing people on the basis of religion. We we are going back to the pre-1947 era when some others used to do it,” he added.
Sinha also accused the BJP of indulging in the vote-bank politics by “breaking social fabric” of the country and asked where was the spirit of “Team India” preached by Prime Minister Narendra Modi in 2014.
“Where has the Team India spirit gone? Are governors not behaving like nominees of the party (BJP). Be it Kerala or West Bengal,” he said, stressing that chief ministers of states were also included by Modi in the “team” to take the country forward.
Sinha alleged that the government was diverting people’s attention from core issues.
“The Government is not concerned about the condition of the youth, farmers and other issues like unemployment. It is only diverting the attention of people from core issues by using a language which cannot be termed democratic,” he said.
Sinha said the CAA cannot be implemented in the present state due to the language used in it and alleged that people are being identified in UP districts despite the fact that rules have not be formulated yet.
“About the economic situation, Sinha said, “Air India is not selling as there is no appetite in the market to purchase it.”
“There is absolutely no elbow room left on fiscal side…In the past five to six years, they have pushed the government to the brink of bankruptcy,” he claimed.
SP chief Akhilesh Yadav too questioned the allegations of foreign funding to anti-CAA protesters, asking what were the Government agencies.
“The Government is suppressing truth and resorting to violence. They should adopt the path shown by Mahatma Gandhi,” Yadav said.
Shatrughan Sinha said that the “anti-national policy” of the government will not be tolerated by people. (PTI)