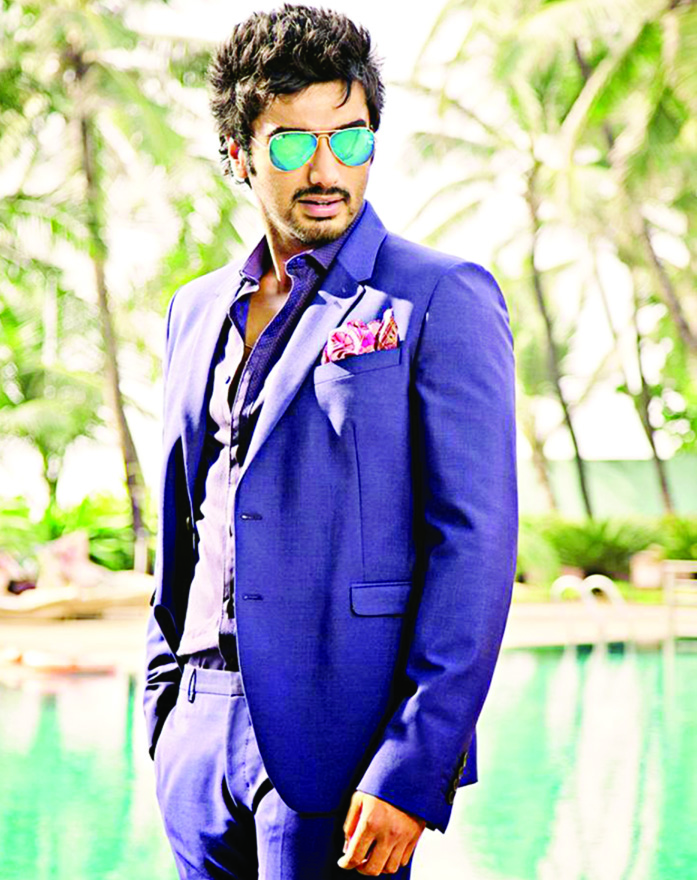 Arjun Kapoor is one of the few star children who decided against making his Bollywood debut under his home banner. The young actor, who made his debut with Yash Raj Films’ Ishaqzaade, shot to stardom in no time.  The five-film-old actor has finally decided to work under his home production and a lot is being expected from Arjun’s Tevar. The actor spoke to Gaurav Sharma.

Finally, you will finally be seen in a home production.
Yes, I was long due and I am sure my father, Boney Kapoor and my uncles Sanjay Kapoor and Anil Kapoor too are equally excited about the film. The film has shaped up well and now it’s up to the audience to decide.
Was it a planned move that you didn’t want to make your debut under your home production?
I haven’t planned anything ever. (Smiles) In the first place, I was never preparing myself to become an actor. I was more inclined towards direction and worked as an assistant on quite a few films. Everyone knows how much I weighed at that time. I was 120 kilos. Then suddenly I was suggested by Salman Khan to try my hand at acting. I had to completely change. He helped me a lot getting into shape and I had to shed a lot of weight. Then I decided that I should do something on my own. I went for an audition at Yash Raj Studios and was selected for Ishaqzaade. That is how it happened.
So you too had your share of struggle.
I had but I also got support from a lot of people. I got the right break and was noticed by some very important people in the industry and kept getting the right offers.
Most of your films have done great business at the box office.
I think I have made the right choices most of the time my decisions worked. I am extremely fortunate to have got a change to work with some very good filmmakers, who showed their faith on me. The audience too have been very kind. Initially, when I was making my debut I was quite nervous before the release of my film, because I didn’t know if the audience would accept me.
How important is Tevar in your filmography?
Every film is important for me at this age. I have done just a handful of films and have to prove myself a lot. I am sure that will happen with time. No film is big or small for me. I know I have to perform with every film and prove my worth as an actor. Tevar is certainly one of the most important films in my career so far and I have given a lot of effort to look by character as real as possible.
Is there an additional pressure because it’s your home production?
As an actor I can’t disown any of my films. I have to be responsible for every film I do. When it’s a home production the involvement with the film increase a lot more because the expectations grow manifold. But had Tevar not been a home production I would have been equally involved with the project.
Tevar is a remake of the hit Telegu film Okkadu.
That increases the responsibility because the original was a big hit. But we have changed a few things keeping in mind that the audience this time will be different. I suppose that happens with every remake but the basic plot is the same.
Tell us about your role.
I play Pintoo, a college goer who is a kabbadi champion. The film is high on action, romance and drama. Pintoo goes to play a kabbadi match where he comes across Radhika and following a series of events their life changes. The film has been extensively shot in Agra and Amit Sharma, who is making his directorial debut, has done a marvellous job. I am really thrilled and can’t wait to watch the film in the theatres.
How do you go about choosing your films?
There’s no set rule. It all depends on the script. If I like a script and feel that I can do justice with the character, I take up the project.
So are you happy with the way your career graph is moving?
I think so far all the right things are happening and I would like it to move it the same way and would be happy to see it going up. (TWF)